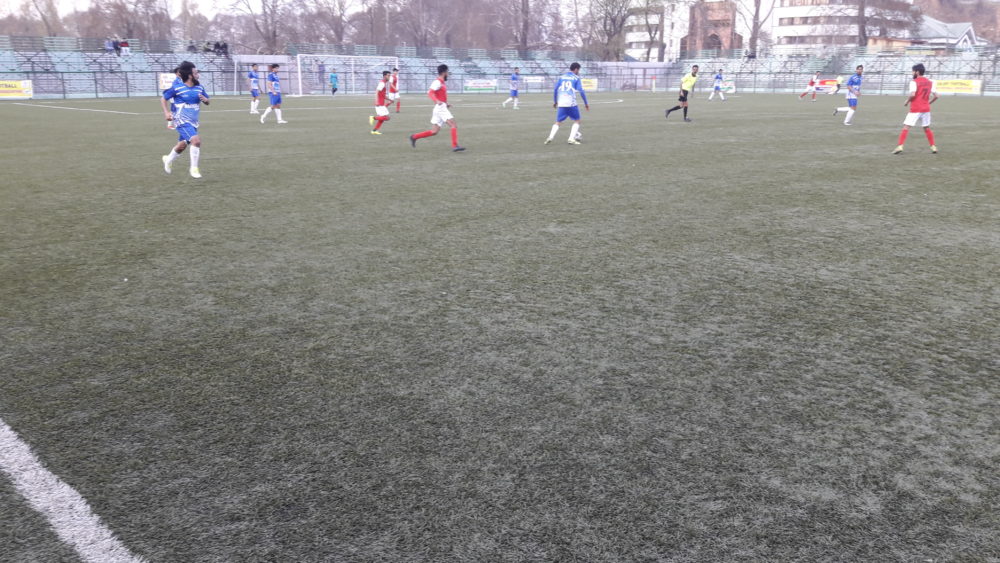 In Rajouri the tournament kicks off
Srinagar: The third phase of the first Mufti Mohammad Sayeed (MMS) Memorial Football Tournament began on Thursday (March 22) with J&K Bank Academy defeating Maharaja Sports by 3-1 in the first match of the round.
After four-days break, due to 2nd Div I-League matches, the matches started at Synthetic Turf Football Stadium in Srinagar on Thursday. In the first high voltage match of the phase, JK Bank Academy defeated Mahraja Sports by three goals. The match proved a delight for thousands of spectators, who had converged to the venue to support their favourite teams, as both the teams displayed high quality skills.
As the play started the Bank players made a move to breach the defence lines of Maharaja Team and Zubair put his team ahead in just third minute of the match by scoring a goal. The lead gave a huge boost to the Bank players and they kept attacking the opposite goal post frequently. However, Maharaja players didn’t lose heart and made all out attacks on Bank goalpost. In the 35th minute of the play, Maharaja scored an equaliser and at the end of first half score line read 1-1.
In the second half, both the teams were eager to take early lead and in the process they played attacking football. However, for 20 minutes, forwards of none of the teams could breach the opposite defence lines. It was find of the season for Bank team, Ahteeb Shafi who finally managed to put his team ahead in 55th minute of the play. It put the defenders of Maharaja Team under tremendous pressure from which they couldn’t recover and the Bank Team managed to score another goal, and thus sealing the fate of the match. Zubair from Bank team was declared as player of the match for his brilliant performance. He was awarded Rs 1000 and a memento.
Meanwhile, in Jammu region, the first phase matches of the MMSM Gold Cup Football Tournament are going on at different venues. In Rajouri district, the matches started with RYFC defeating SWAT-FC by a solitary goal in the inaugural match. In the second match of the day, Asan DC thrashed Thanamandi FC by five goals to nil. Sajid scored two goals for the winning team while Athar, Abir and Zaheer Abbass scored one goal each.
Chairman/Administrator Auqaf Committee Rajouri Abdul Qayoom Dar was the chief guest on the occasion of inaugural function of the tournament. The tournament is being organised by District Football Association, Rajouri under the auspices of J&K Football Association (JKFA).
While in Kashmir region, first leg of the event, being organised by the JKFA under the auspices of State Sports Council and on the directions of All India Football Federation (AIFF), had started in August last year, in Jammu region first phase matches are going on. So far more than 1400 matches have been played in the event across the state.  In the second phase, nearly 700 matches are expected to be held at different venues in J&K.
The aim of the tournament is to unearth the hidden talent in all corners of the state including remote areas. In Srinagar district 104 clubs/teams participated in the first phase of the event and 280 matches of premier division, super division, A, B and sub junior categories were held between August and December 2017.
Similarly,  107 matches were played in Baramulla,  99 in  Sopore ,  78 in Pattan,  54 in Kupwara,  66 in Handwara, 55 in Bandipora, 51 in Hajin 51,  77 in Budgam,  102 in Ganderbal,  27 in Pulwama, 59 in Pampore,  54 in Anantnag , 32 in Shopian 32 and 35 matched in  Kulgam were played.  And, 896 matches were played in districts/zones in the first phase of the event while 69 matches were played in inter-district category. The JKFA is holding 196 further matches of youth league in all 10 districts of the Valley.
In Jammu region, 128 matches of senior division and junior division were played in Jammu district in the first phase while 421 matches are either in progress or to be played in Udhampur, Doda, Kishtwar, Kathua, Poonch, Rajouri, Ramban, Reasi, Samba, Kargil and Leh districts.