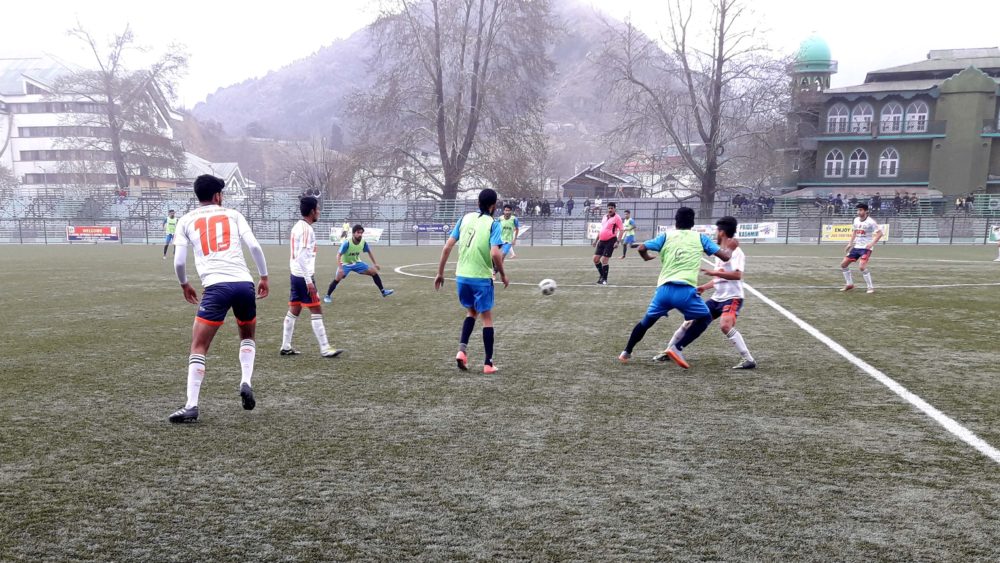 Srinagar: Jammu and Kashmir Police XI defeated J&K State Football Academy (SFA) by two goals to nil in the ongoing third phase of the first Mufti Mohammad Sayeed (MMS) Memorial Football Tournament at Synthetic Turf Football Stadium in Srinagar on Friday (March 23).
In the first half of the match, the forwards of both the teams missed several scoring opportunities. The defenders, especially both the goalkeepers, ensured that the first half ends goalless. The second half, like the first, also started with both the teams desperate to score. However, the forwards of the two minutes were unable to breach the defence lines of each other and it looked that the match may end in a goalless draw.
However, with time running out, the Police team went for an all out attack and they were rewarded in the 57th minute of the play when NeerajBhadur scored the first goal of the match. Trailing by a goal, SFA XI counter attacked. But they couldn’t breach the defence line of Police XI. In the last minutes of the match, Police team scored another goal and virtually sealed the fate of the match in their favour.
Navjot Singh from J&K Police Team was declared as player of the match for his brilliant performance. He was awarded with Rs 1000 cash and a memento.
The matches of MMSM tournament are also going on at different venues of Jammu region. While in Kashmir region, first and the second leg of the event, being organised by the JK Football Association (JKFA) under the auspices of State Sports Council and on the directions of All India Football Federation (AIFF), have been completed, the first phase matches are underway in Jammu.
The aim of the tournament is to unearth the hidden talent in all corners of the state including remote areas. In Srinagar district 104 clubs/teams participated in the first phase of the event and 280 matches of premier division, super division, A, B and sub junior categories were held between August and December 2017.