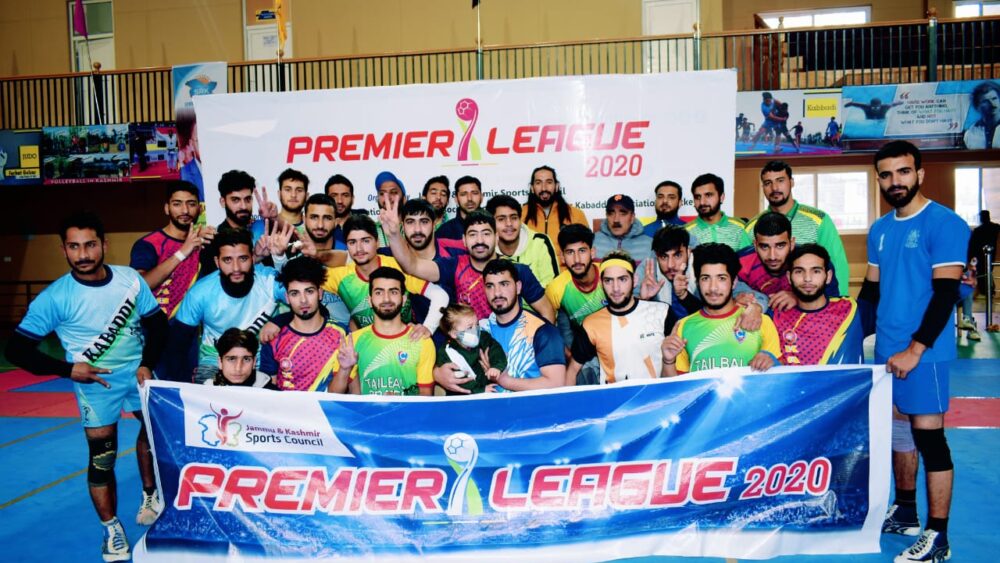 In the ongoing JKSC Premier League 2020 three matches were played in Kabaddi discipline today at Mini Indoor Hall Pologround Srinagar. In the first match Acme Sports Academy beat Hussiani Sports Club in a thrilling contest by 65:37 points. With this win Acme Sports Academy qualifies for Phase 2 (Divisional Level) of Kabbadi Premier League from district Srinagar. Acme Sports Academy won all the matches in their first phase.
The second match of the day was played between Snow Poultry and Akash Enterprises Kabbadi Club which was won by Snow Poultary Club by 66:42 points. The third and final match of the day and phase first was played between Angles Mission and Heaven Look Kabbadi Club which was won by Angles Mission Kabaddi Club by 41:36 points.
At Synthetic Turf Football Stadium Srinagar two matches were played in football discipline. First match of the day was played between Kashmir Avengers Club and JK Sports council Academy which was won by Kashmir Avengers by 2:0 goals.
The second match of the day was played between J&K Bank XI and Hyderya Sports Club. From start of the match both teams played attacking football and tried hard to hit the nets. It was on the dying minutes of the match when J&K Bank managed to score the goal and won the match by a solitary goal.
A large number of football supporters witnessed the match and enjoyed their favourite game on a sunny Sunday.
No matches were played in Hockey and Volleyball discipline due to the wet conditions of the ground. However Volleyball matches will commence soon at Pologround Indoor Hall Srinagar.
The Premier League is being organised by J&K Sports Council in collaboration with respective sports associations.