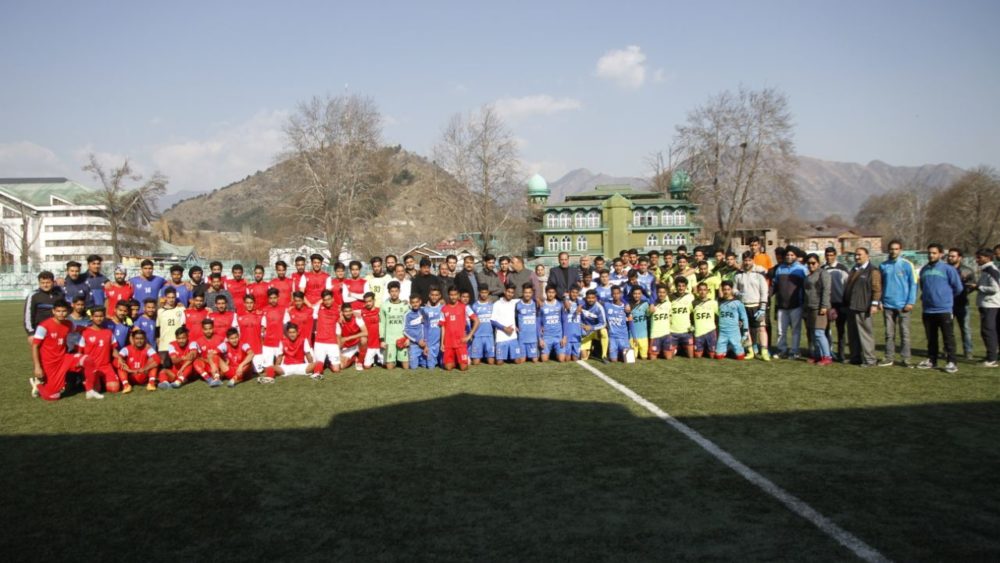 In Poonch, tournament reaches to final stage
Srinagar, March 18: J&K Bank Academy Srinagar and State Football Academy (SFA) XI qualified for the next phase of the ongoing first Mufti Mohammad Sayeed (MMS) Memorial Football Tournament. While Bank Academy won their match, SFA XI played a goalless draw with Shaheen FC Jammu.
The matches were played at Synthetic Turf Football Stadium in Srinagar on Saturday (March 17). In the first match of the day, which started at 2 pm, Bank Academy XI defeated Jammu United FC by two goals to one. In the thrilling encounter, boys from both the teams played aggressive football winning accolades from hundreds of spectators present in the ground.
Ahteeb Shafi, who has been a consistent performer for the Bank Team this season, opened account for his team in just 10th minute of the match giving early lead to his team. Leading by one goal, gave huge confidence to the Bank players and they kept attacking the opposite goal post with higher frequency. The defenders of Jammu United tried their best to keep the forwards of Bank at bay, but in 43rd minute, couldn’t stop the Bank forwards to double the lead.
Trailing by two goals, Jammu United went for an all out attack in the second half. They made desperate attempts to score and were finally successful in scoring one goal in the 53rd minute of the play. After that no team was able to score in the remaining time, and the match ended with 2-1 in favour of Bank team. Honey Mehra from Jammu United was declared as player of the match for his performance.
In the second match of the day, which started at 4 pm, SFA XI played a goalless draw with Shaheen FC Jammu. Both the team tried their best to score in the allotted time, but missed the scoring chances. The goalkeepers of the two teams made some excellent saves throughout the match. Sheraz from SFA was declared as player of the match for his performance.
Secretary State Sports Council Waheed-ur-Rehman Parra was the chief guest on the occasion, while Divisional Sports Officer Nuzhat Ara was the guest of honour. JKFA President, Zamir Thakur, General Secretary S A Hameed, Sports Council member Prof B A Shah, and other members of the JKFA were also present on the occasion.
With four points in their kitty, the SFA XI qualified for the final round of the event. The winners of two groups (J&K Bank Academy and SFA XI) have qualified for the third phase of the event, where they will play with six premier club teams on round robin basis. The third phase matches are scheduled to start from March 22 at Synthetic Turf.
Meanwhile, the MMS Memorial tournament in Poonch district has reached to final stage. In the first semifinal, City Club thrashed Chandak Club by five goals to nil. Jatinder and Karmveer scored two goals each for the winning team while Aman scored one. In the second semifinal, Purani Poonch defeated Jhullas Club by four goals to three in a tie-breaker. In junior category, Dream Football Club defeated Chandak Club by a solitary goal.
While in Kashmir region, first leg of the event, being organised by the Jammu and Kashmir Football Association (JKFA) under the auspices of State Sports Council and on the directions of All India Football Federation (AIFF), had started in August last year, in Jammu region first phase matches are going on. So far more than 1400 matches have been played in the event across the state.  In the second phase, nearly 700 matches are expected to be held at different venues in J&K.