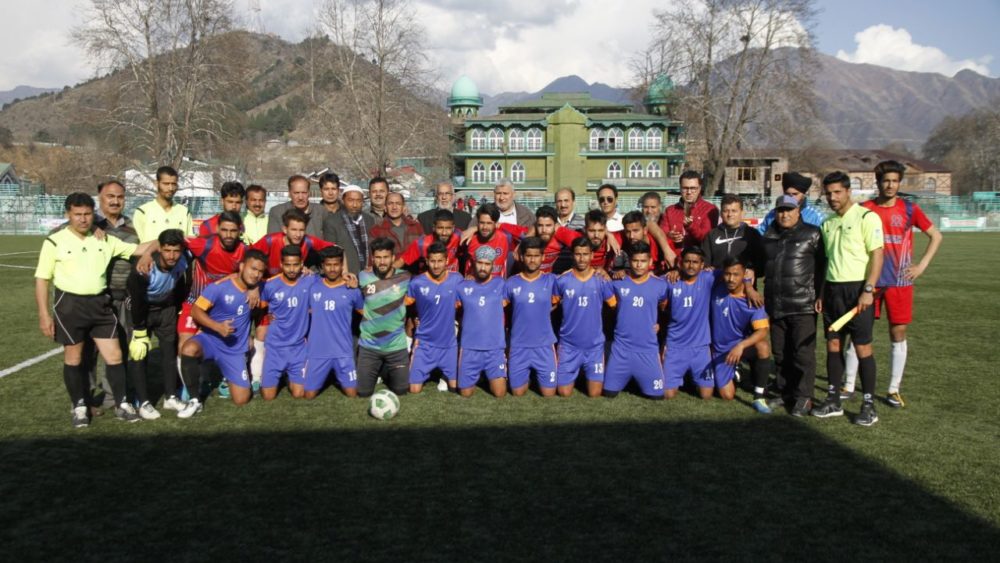 Srinagar, March 17: Jammu United FC and J&K Bank Academy Jammu played a goalless draw while FC Bandipora and Shaheen FC Jammu played a 1-1 draw in the two matches of ongoing first Mufti Mohammad Sayeed (MMS) Memorial Football Tournament played at Synthetic Turf Football Stadium in Srinagar on Friday (March 16).
In the first match of the day between Jammu United FC and J&K Bank Academy Jammu, which started at 2 pm, no team could score in the allotted 90-minutes of the play. Right from the start of the match, defenders of both the teams tried to breach the defence lines of each other, but failed to do so. Jammu United and Bank Team got several chances to score which they missed.
It seemed that both the teams were happy to play a draw as they were more concerned on saving the goals than scoring. Both the goalkeepers made some excellent saves denying the opposite teams of any chance to score. Illyas Ahmad was declared as man of the match for his brilliant performance.
The second match of the day, which started at 4 pm, between FC Bandipora and Shaheen FC Jammu was a thrilling encounter as players from both the sides displayed high quality football. The high speed and quality football enthralled the spectators, who had come in huge numbers to cheer up for their favourite teams.
Ishan Gupta opened the account for Jammu team in just 2nd minute of the play. Conceding a lead in early minutes didn’t deter Bandipora boys to play aggressively as they made valiant attempts to score an equaliser. However, Jammu defenders were equal to the task and they thwarted all the attempts by the opposite forwards to score an equaliser in the first half. At half time, Jammu United led by 1-0.
The second half witnessed some enthralling football by both the teams. While Bandipora team was desperate to score an equaliser, Jammu boys were attempting to double the lead, but both failed till the last 10 minutes of the match. When it seemed that Jammu team may be able to maintain the lead till the end of the play, Shakir of Bandipora team managed to score an all important goal for his team. In the last 10-minutes of the play, both teams made several attempts to score but defenders managed to keep the forwards at bay. When the referee blew the final whistle, the score line read 1-1. Shakir of Bandipora team was declared as player of the match.
Mohammad Amin Khan, member State Sports Council was the chief guest on the occasion while JKFA President, Zamir Thakur, General Secretary S A Hameed, Sports Council member Prof B A Shah, and other members of the JKFA were also present on the occasion.
Meanwhile, junior category competition of MMS Memorial Tournament started in Poonch district of Jammu region at Boys Higher Secondary School, Poonch. In the first match, Dream Club defeated Chandak Tigers by two goals to nil. Sukh Manveer scored both the goals for the winning team.
In senior group match, City Club defeated Purani Poonch by a solitary goal in a closely contested affair. In second match of the day in the same group Chandak Club beat United Club by 2-1. Waqar and Haroon scored one goal each for the winning team.
While in Kashmir region, first leg of the event, being organised by the Jammu and Kashmir Football Association (JKFA) under the auspices of State Sports Council and on the directions of All India Football Federation (AIFF), had started in August last year, in Jammu region first phase matches are going on. So far more than 1400 matches have been played in the event across the state.  In the second phase, nearly 700 matches are expected to be held at different venues in J&K