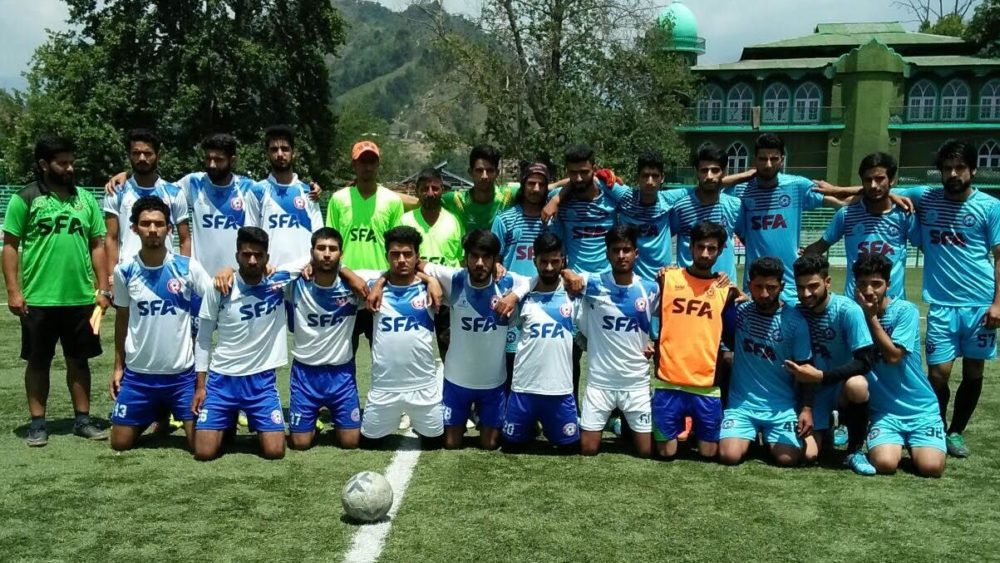 State Football Academy of J&K State Sports Council kick started Inter SFA Football League Phase 2 at TRC Turf in which winners of Kashmir  Clusters team are competing  against each.
In the first match SFA Baramulla U13 defeated SFA pulwama by two goals to nil. SFA Baramulla dominated the game with paying quality football and maintained the presure on the pulwama side. Obaid scored the first goal from the Baramulla  in the 15th minute of the game and the lead was doubled by Farjyad in the 40th minute of the game finishing the match at 2-0 scoreline securing all 3 points for his team.
In the second match between SFA Pulwama and SFA Kupwara U15 category, both the teams demonstrated quality  piece of work but we’re unable to break the deadlock in the first half. Two goals were seen in second half by Faizan and Obaid from Pulwama & Kupwara respectively ending the game at 1-1 scoreline, sharing a point each.
The 3rd match in under18 category was a tight affair between SFA Baramulla & SFA Kulgam ended eventually at 1-0 margin in favour of SFA Baramulla. Shahid from Baramulla scored the lone goal in the 40th minute of the game grabbing all the 3 points for his team.
International Star player and Incharge SFA Mehraj Ud Din Wadoo witnessed all the matches and was seen busy with scouting players for upcoming competitions. Joint Secretary (K) Sports Council Mr. Nazir Ahmed was the chief guest on the occasion who later encouraged players with his motivational words.