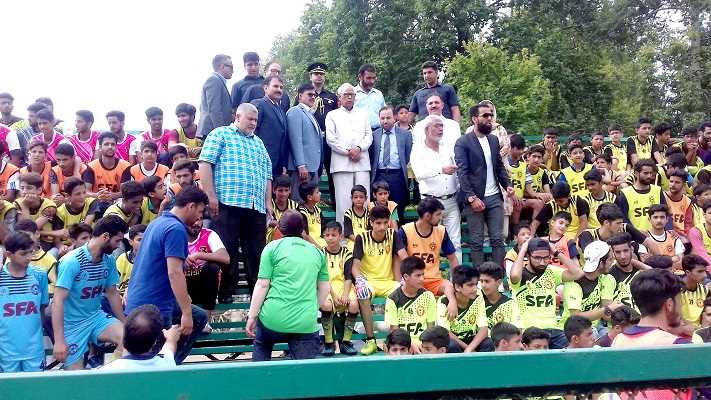 Srinagar, July 16: Governor N.N. Vohra on Monday inaugurated the Inter State Football Academy – Football League Phase-II at the Astro Turf, Tourist Reception Centre, Srinagar. Governor interacted with the teams of football players who have come from various districts of Kashmir Division to participate in this Tournament. He congratulated the SFA for taking the initiative of organising this Competition.

Highlighting the crucial importance of sports for the holistic development of youth, Governor emphasised the need to provide adequate opportunities for school and college students participating in sports activities. He observed that all sports activities engendered discipline and prizes won in sports competitions boost the self-confidence of the players and athletes.

Governor urged K. Vijay Kumar, Advisor to Governor to see that tournaments are organised throughout the year, in all the three regions of the State and to ensure that all shortcomings in the path of sports promotion are remedied on most immediate basis. He asked Advisor to take all measures required for enabling successful organisation of the national level football competition in Srinagar, due to be held in September this year.
Mehraj Ud Din Wadoo, International Footballer highlighted the programmes and achievements of the SFA.

Later on Vohra distributed sports kits among both boys and girls SFA teams of Kashmir division at Astro Turf Ground, Srinagar. While addressing the enthusiastic footballers, trainers and coaches of Kashmir Province, Vohra appreciated the efforts and initiatives taken by Council and SFA jointly for providing youth a better platform to showcase their talent.
“If we provide opportunity and platform to our youth they will definitely excel in their respective fields and we should felicitate them with rewards so as to encourage them and boost their morale,” he said.

He further emphasized that the prime focus should be on sportspersons and young kids and young boys and girls should be provided with ample opportunities to indulge in sports.
“In coming days, whatever is required to groom sports talent of these kids besides to promote sports in the State whether it is infrastructure, equipments, quality training etc. government will provide that,” he said and adds, “Till September month all the facilities and equipments will be provided to the sportspersons.”

While presiding on the event, Commissioner Secretary, Javaid Ahmad Khan said that maximum opportunities should be provided to the school children especially girls so that they too can prove their mettle.

In his address, In-charge SFA, Mehraj-u-Din Wadoo highlighted the developments and achievements of SFA from its inception.

“SFA which is successfully running in all the 22 districts of the State comprises almost 100 players under three age categories in each district. To empower women through sports, SFA has also launched women football academies in eight districts comprising 25 players in each district team,” he said.

Moreover, in coming months SFA will likely launch Girl Football Academies in rest of the district as well.

“Our main focus is to give quality coaching and training to the players to produce international players from the academy,” Mehraj adds.

Pertinently, SFA is running almost 2,500 Football Learning Schools in each district with almost 40 trainers to impart professional training to these budding footballers.