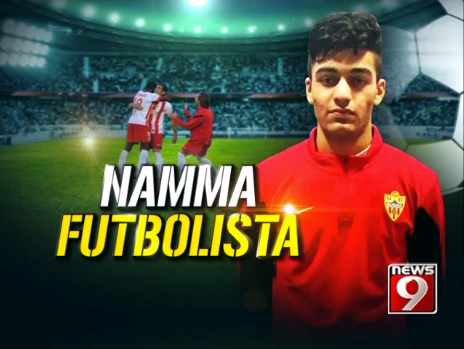 Journey of Jumbo boots from Kasmir to Madrid

Our next generation is not just showing interest in the field of Sports, but are setting examples for the generations to come. They are showing their potential at the International as well as national level. Ishan, 20, from South Kashmir Pulwama’s Tral, is all set to make his state proud at international arena in the discipline of Football. He became the first Indian to sign professional contract in Spain.

Ishan was just 3 years old when his family moved to Philippines in 2001. He stayed there till 2009 and learned his basics in the discipline of football from British School Manila. Finished his grade 10th from “The International School Baronage”, India’s prestigious school where more than 90% kids go to Ivy League Harvard Yale MIT. Ishan preferred to pursue football as carrier and in 2014 went to an Academy for one year in Madrid to learn more. His desperation for the game didn’t stop here and in 2016, he went to Almeria in Sugenda club (second highest league in Spain) and played under 18 with them. In Spain he signed first contract of his football carrier.

Ishan went to Sweden to attend Gothia Cup where one Swedish club got interested in him. He went for trials but things did not work as most of the players from our homeland lack tactical football training. In 2017, he signed professional contract with Almeria Laliga club and played in Under 18 team.  Unfortunately, he got injury and came back to India and missed few months of football training’s. He has recovered now and is going back on 12th and will explore new possibilities. I wish him all the best for future endeavor’s!!

Waheed ur Rehman is Youth President JKPDP and Secretary, J&K State Sports Council. He can be mailed at: parawahid@gmail.com