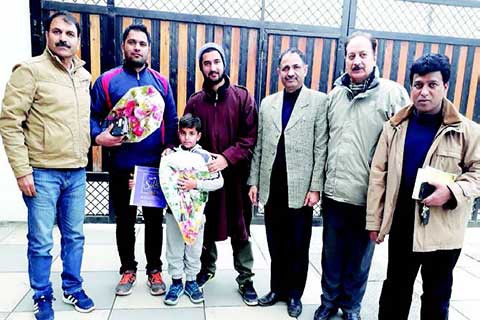 Hashim Mansoor, a seven-year old boy from north Kashmir’s Bandipora district, has emerged as yet another young star from the region after winning a gold medal in the Asian Karate Championship held recently at the Talkatora stadium in  New Delhi.
“We have been receiving hundreds of calls daily from parents in Kashmir seeking our support to hone the sports skills of their children so that they can take part in the state, national and international events,” said Hashim’s coach Faisal Ahmed at a felicitation function organized by J&K State Sports Council in Srinagar.

On the occasion, Hashim was felicitated by Jammu and Kashmir State Sports Council by presenting him a memento.
Hashim won gold at the Asian Youth Karate championship, that witnessed participation from 19 other countries. He represented India in the sub-junior category in the championship.
Hashim is all set to represent India in the World Karate Championship to be held in Europe in September 2017.

Meanwhile J&K Youth Karate Association, President, Ghulam Nabi Tantray, said that in view of massive interest of young sports aspirants from Kashmir they have requested the organizers of national level Karate championship to register 50 children from J&K. The event would be held in Bihar by end of this month
Congratulating the young boy and his coach for the great achievement, Jammu and Kashmir State Sports Council assured them of every help in their endeavor towards promoting sport in Bandipora and other parts of Kashmir.
Jubilant with his feat, Hashim Mansoor had a good and long talk with the Jammu and Kashmir State Sports Council officials and gave them a detailed account of his experience during the championship and his win.
Hailing Hashim’s feat, Secretary Jammu and Kashmir State Sports Council Waheed Ur Rehman Para said that he has become inspiration for youth of the state.
Pertinently, earlier an eight-year-old girl from Bandipora, Tajamul Islam had clinched Gold at the World Kickboxing Championship.