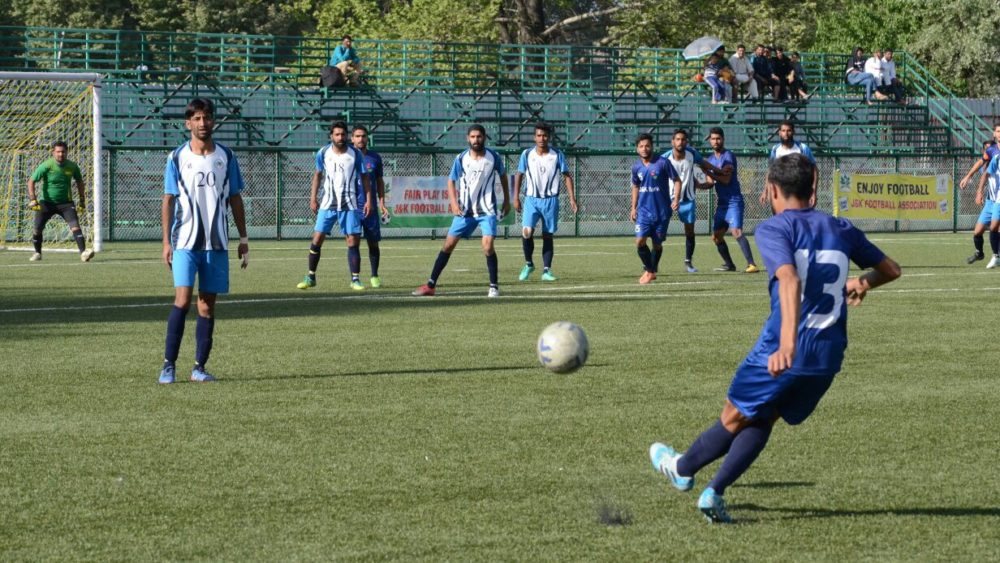 Semi-final matches played in Samba
Srinagar: Jammu and Kashmir Bank defeated Jammu and Kashmir Police by two goals to nil in a match of ongoing Mufti Mohammad Sayeed Memorial (MMSM) Football Tournament played at Synthetic Turf TRC Ground, here on Friday (April 27).
The only match of the day between two heavyweight teams of the state started at 4:30 pm and a large number of football fans had converged to the venue in advance. Amid huge cheers by the fans the players of the two teams started to battle it out in the middle. The Bank players were more aggressive in their approach and they made some early moves to beat the defence lines of the Police.
However, the goalkeeper and other defenders of Police team were equal to the task and they kept the Bank forwards at bay. The Police forwards also made some counter attacks in the first half, but Bank defenders were solid in defence. The first half ended in a stalemate.
In second half the situation was no different with Bank players making more attacks and Police team playing defensive football. In 62nd minute of the play, Aakif of Bank managed to score the first goal of the match putting his team ahead. In the next 20-minutes of the play Police players made desperate attempts to score an equaliser, but failed.
The Bank players were not only determined to maintain the lead, but occasionally they counter attacked and in 83rd minute of the play, they were successful in their attempt as Aakif scored his and team’s second goal. It dampened the spirits of police players and for rest of the play no further goals were scored. When the referee blew the final whistle, the score line read 2-0 in favour of the Bank. Urfan Ahmad of the Bank was declared as player of the match for his performance. He was given a cash prize of Rs 1000 and a memento.
Meanwhile, the matches of the event are going on in Jammu as well at different venues. In a B-Division match, All Star FC defeated Hero FC by two goals to one. In the closely contested match, players from both the teams mesmerised the spectators with attacking football. In another B-Division match, Kargil United FC beat Clmart FC by 2-0. Both the matches were played at GGM Sciences College, Ground in Jammu.
In Samba, two semi-final matches were played in which Sangwali Mandi FC and Kartar Football Club ‘B’ emerged as winners. In the first semi-final of the day, Sangwali Mandi FC defeated Kartar Football Club ‘A’ by two goals to one. It was a closely contested match in which fortunes fluctuated from start till the end. In the second semi-final of the day, Kartar Football Club ‘B’ defeated Chandan Football Club, Mandi by 3-0. It was a one sided match, as Kartar Football Club ‘B’ dominated the play right from the start till the end.
While in Kashmir region, first and the second leg of the event, being organised by the JK Football Association (JKFA) under the auspices of State Sports Council and on the directions of All India Football Federation (AIFF),
The aim of the tournament is to unearth the hidden talent in all corners of the state including remote areas.