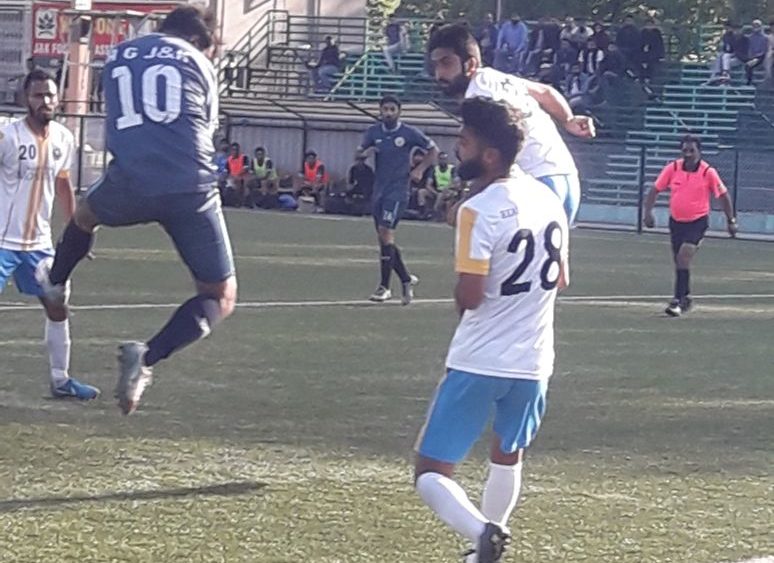 Srinagar: In the ongoing first Mufti Mohammad Sayeed (MMS) Memorial Football Tournament, Real Kashmir FC played a 1-1 draw with Accountant General’s (AG’s) XI in a match played at Synthetic Turf TRC in Srinagar on Sunday (April 15).
Amid cloudy weather, the match started with a bang as the two star studded teams went on all out attack from the word go. The forwards kept the defense lines under pressure. However, both the teams failed to score as they missed several opportunities. It was Ubaid, who broke the deadlock by scoring first goal for Real Kashmir in 23rd minute of the play.
Trailing by one goal, the AG’s XI players went for an all out attack to score an equaliser. But the defenders of the Real Kashmir, especially the goalkeeper, were equal to the task and they ensured the first half ends with 1-0 lead in their favour.
The second half, like the first, also started with both the teams desperate to score. While AG’s XI was trying to score an equaliser, the Real Kashmir forwards were looking for an opportunity to double the lead. However, the forwards of the two teams were unable to breach the defence lines of each other and it looked that the match may end in a victory to Real Kashmir.
But Bilal Ronga of AG’s XI from nowhere managed to breach the defence lines of the opposite team and scored an equaliser in 48th minute of the match. For remainder of the match, the aggression of players of both the teams was at its peak. However, as no further gaols could be scored, the match ended in a 1-1 draw. Bilal Ronga was declared as player of the match for his brilliant performance. He was awarded with Rs 1000 cash and a memento.
Meanwhile, in Jammu the B-Division matches of the event are going on in full swing at different venues. At GGM Science College, All Star FC defeated Baba FC by three goals to 1 while Churchill Bros ‘B’ thrashed Nagrota FC by 4-1 in other B-Division match.
In Samba district, Kartar Football Club played a goalless draw against Vijaypur Football Club. In Kathua, 23 matches of the event have been completed while 19 more matches would be played in the coming days. Top football Clubs of Jammu, Kathua, Hiranagar, Billawar and Basohli are taking part in the tournament, which is being held under the banner of Jammu and Kashmir Football Association (JKFA) and is sponsored by J&K State Sports Council.