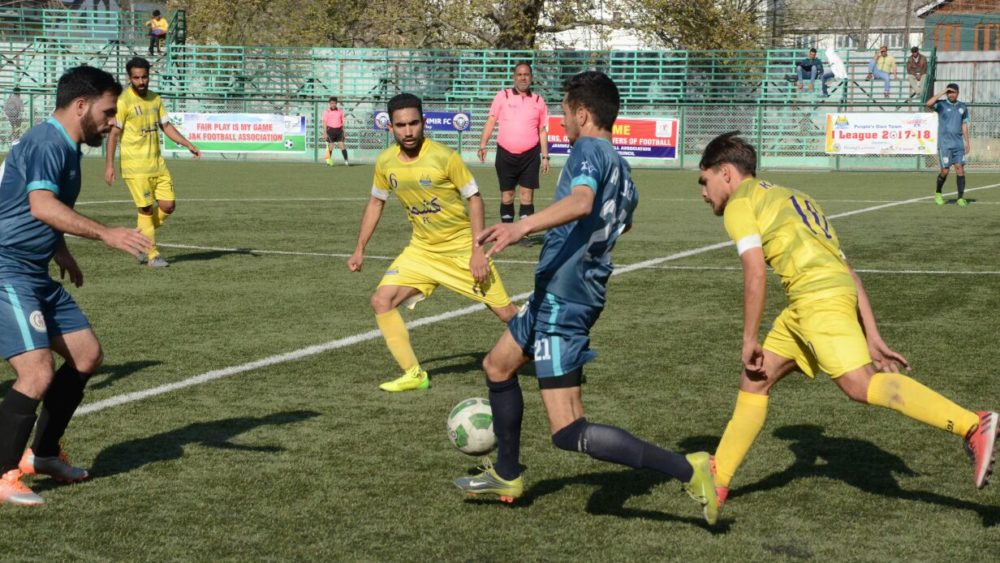 Srinagar: The matches of the ongoing first Mufti Mohammad Sayeed (MMS) Memorial Football Tournament are going on in full swing at different venues of the state with Accountant General’s (AG’s) XI defeating Lone Star KFC by three goals to one in a match played at Synthetic Turf TRC in Srinagar on Friday (March 30).
The match between star studded teams of AG’s XI and Lone Star KFC was expected to be a high voltage encounter and it lived upto the expectations of the spectators, who had thronged the venue in thousands. Players from both the teams displayed high quality and high speed football enthralling the huge crowd.
As the match started, forwards of both the teams started attacking other’s goalpost to seize an early initiative. AG’s XI succeeded in their effort when Amanjoot Singh scored the first goal for his team in just 7th minute of the play.
Leading by a goal, lifted the confidence of the AG’s XI and they continued to attack opposite goalpost with higher frequency. The attention of Lone Star players was diverted from attack to defence due to the aggressive play by the AG’s players. In 15th minute of the play, the attacking football paid rich dividends to AG’s team as they doubled their lead. In rest of the first half, no further goals were scored and the score-line read 2-0 in favour of AG’s team.
As the second half began, Lone Star players were desperate to score and they launched several attacks on the opposite goalpost. Tafazul of Lone Star managed to score one goal in 45th minute of the play and it opened up the match. The rest of the play was high speed football from both the teams as Lone Star tried their best to score an equaliser while AG’s XI were trying to score third goal. When it looked the match will end 2-1, AG’s team managed to score the third goal and virtually sealed the fate of the match.
When the referee blew the final whistle the score line read 3-1 in favour of AG’s team and it was a fair result considering the quality of football displayed by them. Amanjoot Singh was declared as player of the match for his brilliant performance. He was given Rs 1000 cash prize and a memento.
Meanwhile, MMS Memorial Gold Cup State League Football Tournament also began at Kathua Stadium on Thursday. Top football Clubs of Jammu, Kathua, Hiranagar, Billawar and Basohli are taking part in the tournament, which is being held under the banner of Jammu and Kashmir Football Association (JKFA) and is sponsored by J&K State Sports Council.
While in Kashmir region, first and second phase matches of the event have been completed, in Jammu region first phase matches are going on. So far nearly 1600 matches have been played in the event across the state while more than 500 matches are expected to be held at different venues in J&K in coming days.
The aim of the tournament is to unearth the hidden talent in all corners of the state including remote areas. In Srinagar district 104 clubs/teams participated in the first phase of the event and 280 matches of premier division, super division, A, B and sub junior categories were held between August and December 2017.
JKFA President Zamir Thakur said the event has turned out as a mega hit among the football fans and it will in long run help to find raw talent from across the state. “Football which is the most popular game in Kashmir has today touched its zenith in popularity.  In seventies and eighties Kashmir along with Kolkata, Kerala and Goa was considered as hub of football in India. With the formation of two I-League clubs in recent years by two business groups of the Valley, we are hopeful that the game of football will bring more glory to the state in coming years,” Thakur said.