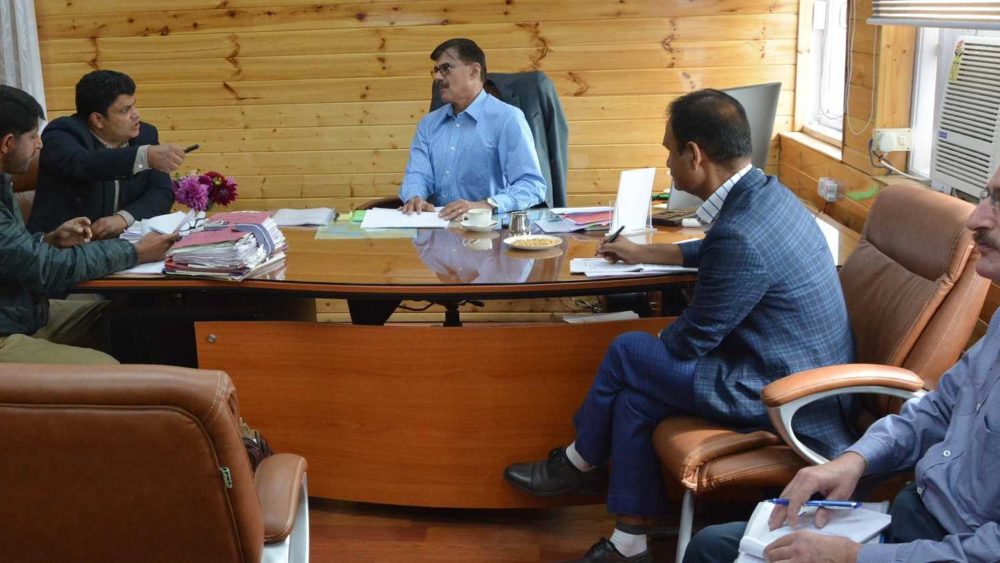 Advisor to Governor, K Vijay Kumar Friday asked the JK State Sports Council (JKSSC) to expand their activities in the state with a motive to attract more youth especially girls for their participation in sports events.

The Advisor made these remarks while chairing a meeting with the officers of JKSSC and YS&S to review the activities and performance of Sports Council, here today.
The meeting was attended by Secretary Youth Services & Sports Sarmad Hafeez, Director General YS&S Dr Saleem-U- Rehman, Secretary J&K State Sports Council, Dr Naseem Javeed Choudhary and other concerned officers.

During the meeting, the Advisor sought details of activities that JKSSC has carried out and is planning to carry out in the coming time. He asked about the details of players (boys and girls) participated in such sports events/ activities.

Stressing on ensuring maximum participation of girls in the sports activities, the Advisor asked the Secretary JKSSC to promote sports among girls and encourage them to take participation at every level. He said that talented youth should be given proper coaching in their respective disciplines so that they can further participate in national/international level.

He suggested involving college students by organizing inter college tournaments where both boys and girls can be attracted towards participating in various games.

Secretary JKSSC, Dr Naseem Javeed Choudhary made a detailed presentation regarding the functioning of Sports Council. The meeting was informed about the organizational structure and administrative set up of the sports body. A brief discussion was also held on existing human resource and with a request from JKSSC to fill up the vacant posts.

Details of other activities conducted at district and other level were also given during the meeting. Secretary JKSSC also told the meeting about the performance of sportspersons in international/national events till September 2018 and number of medals won in the said events.
At international level, the sportspersons won 2 gold, 3 silver and 3 bronze medals whereas 26 gold, 28 silver and 19 bronze medals in national level events.

K Vijay Kumar asked for organizing the events on bigger level giving wide publicity in media so that larger participation can be seen.

A detailed discussion was also held on progress and achievements of State Football Academy and State Cricket Academy.

Giving out the details of available sports infrastructure in the state, the Secretary JKSSC informed that presently there are around 152 stadiums and playing fields in the various districts of the state.
While reviewing the status of Prime Minister’s Development Package, it was told that out of total funds received worth Rs 44.94 crore, Rs 31.64 crore has been utilized achieving financial progress of 70 percent.

The Advisor also reviewed the status of renovation, up-gradation and development of Sports Infrastructure works at Bakshi Stadium Srinagar, M.A Stadium Jammu along with the status of ongoing works on 22 indoor stadiums.

He asked Secretary YS&S to ensure proper monitoring of the works so that same can be completed in given time.

Issues related to the development of sports infrastructure in the state including water sports at Nehru Park, Dalgate, Srinagar & Ranjit Sagar Dam, Basohli, Kathua were also discussed in the meeting. It was informed that both the projects have been submitted to the GoI for approval.

Secretary JKSSC also apprised the meeting about the proposed activities for 2018-19 to be hosted by the various sports associations in the state.