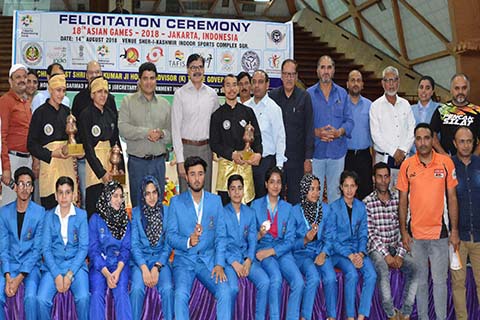 Bakshi stadium to be developed as per international standards: Advisor Kumar

Advisor to Governor K Vijay Kumar today said the renovation work of the Bakshi stadium is going on in full swing and that it will be developed as per the international standards.

Advisor said the central government has already sanctioned Rs 44 crore for renovation of the stadium that was damaged in 2014 floods. He said the government is committed to develop the sports infrastructure of the state and that work is going on many projects simultaneously including the renovation of Bakshi Stadium and MA stadium Jammu.

He said the Bakshi Stadium will be developed as per the FIFA norms. He said under the programme, the football turf will be developed on modern lines while capacity of the stadium for spectators will also be increased besides developing VIP galleries, pavilions proper drainage and electricity. He said there will be all the required facilities in the stadium for the sports persons and that it will be one of the finest football stadiums of the country.

He said government is making committed efforts to develop adequate sports infrastructure in the State particularly in rural areas to provide basic sports facilities to encourage and nurture the local talent. He urged the officials of various concerned departments to make coordinate efforts to provide a platform to the youngsters to showcase their talent. He said there is no dearth of talent in the J&K state youths and they have proved themselves on international level when facilitated properly.

Earlier the advisor felicitated the participants of 18th Asian Games-2018 to be held at Jakarta Indonesia from August 18th. He interacted with the sportspersons and wished them good luck for the upcoming championship.

The players showcased their talent during the function while the audience lauded their performance.   The 18th Asian Games 2018 is organized by Indonesian Olympic Committee under the aegis of Olympic Council of Asia (OCA), which is the regional Sporting organization of International Olympic Committee (IOC). An official said the status of the Asian Games is next step to the Olympics, and it is counted in the 2 world’s major events, i.e. Asian Games and Olympic Games.

While interacting with the players, advisor said the sportspersons are the ambassadors of the country and role models for the youths. He wished the players good luck for the upcoming event and urged them to give their best in the games.