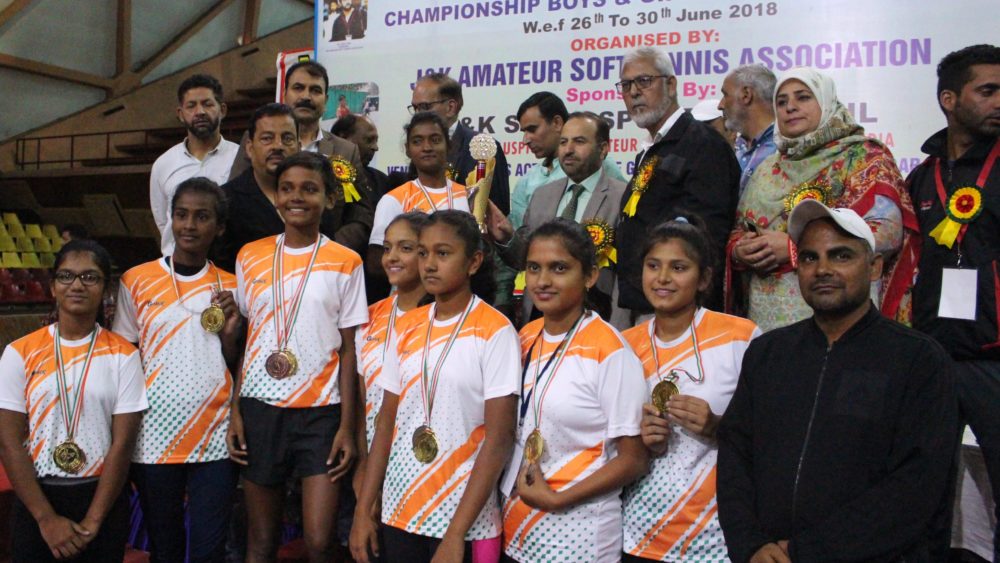 23 states participated in the championship

First of its kind in the state, 23 states participated in the championship which was held for the first time by J&K Amateur Soft Tennis Association.

“The National Championship in Soft Tennis has been held in Srinagar for the first time. We are happy to see the overwhelming response from other states of the India and today it concluded on a very good note,” said Gh Hassan, General Secretary of the Association.

Among 23 teams from 23 states, U.P emerged as winner in Team Event Girls followed by M.P. Chattisgarh and Karnataka shared 3rd position in the team event girls.

In boys Team event, M.P emerged as winners followed by U.P. while as Gujrat and Bihar shared 3rd position respectively.

Joint Secretary (K), Nazir Ahmad while speaking on the occasion said, “The National Championship in Soft tennis has enthused the hope among youngsters and we will try our best to hold national championships in other disciplines too here in Srinagar.”

President J&K Amateur Soft tennis Association, Arif Amin said, “It is good that youth are getting engaged in sports activities and we will continue to engage them in future too.” He further added, “The championship was a success and it was good to see that 23 states participated in the championship.”

Hinting for Senior championship, Arif said, “hopefully we will hold senior National Championship in future too,” he added.

Secretary to Govt, Youth Services & Sports, Technical education, Higher Education, Mohd Javaid Khan was the chief guest on the concluding function, who along with members and officials of J&K state Sports Council distributed the prizes among the winners on the occasion.

The chief guest also honoured the members and officers of Sports council, J&K Amateur Soft Tennis Association, employees of Indoor and Gindun stadium too by presenting them mementoes as a token of gratitude from the organizers. The Championship was sponsored by J&K state Sports council.

Speaking on the occasion, Khan said, “Our state is our pride and I hope that all participants had a good time here in the valley. I on daily basis deal with the youth and I am happy that you came here from different states to showcase your talent in the particular sports discipline.” He further wished them best for future endeavours.