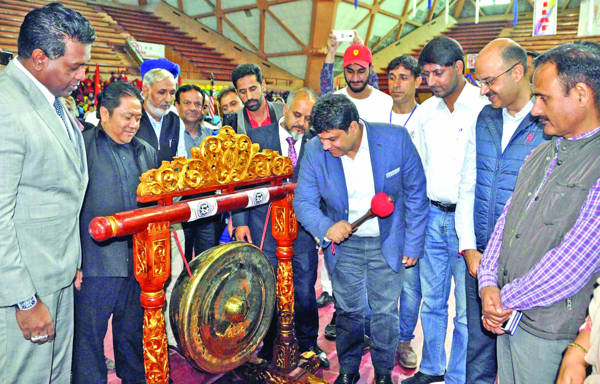 STATE TIMES NEWS
SRINAGAR: Secretary Youth Services and Sports and Information, Sarmad Hafeez on Monday inaugurated Fourth Asian Pencak Silat Championship-2018 at Sher-e-Kashmir Indoor Stadium, Srinagar.
The championship is being organised for the first time ever in J&K by Indian Pencak Silat Federation in collaboration with Ministry of Youth Affairs and Sports, Government of India, Sports Authority of India and J&K State Sports Council.
Around 250 players and officials from 10 countries including Singapore, Indonesia, Malaysia, Vietnam, Republic of Korea, Chinese Taipei, Bangladesh, Nepal, Philippines and India are participating in the three-day event.
Speaking on the occasion, Sarmad said it is for the first time in its sports history that J&K is hosting such a prestigious event in Pencak Silat, an Indonesian martial art.
He said once the players and the officials go back to their respective countries, they would carry the message of love and hospitality from Jammu and Kashmir to their countrymen. Terming sports an engine which can propel societies forward, Sarmad said that such events create a platform where youth can be exposed to different cultures and exchange of ideas. He thanked Indian Pencak Silat Federation, Ministry of Youth Affairs and Sports, Govt of India and Sports Authority of India for organising the event at Kashmir in a short span of time. He assured full support from Governor’s administration for organising different sports activities in the State.
Secretary General International Pencak Silat Federation, Teddy Surat Mudgi said Pencak Silat is the purest martial art which is being practiced in 55 countries across the world. “This art is loved all over the world and many countries are learning it,” he added.