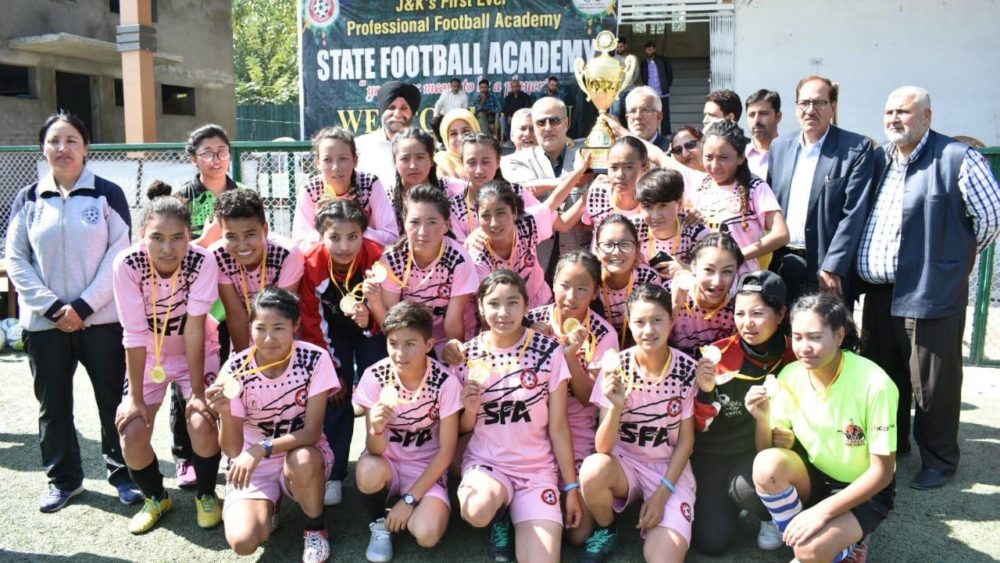 In the final match of ongoing Inter SFA Football League 2017-18, SFA Leh defeated SFA Jammu by 2-1, in a nail biting clash between the two teams, at TRC Turf Stadium Srinagar.
In the first half SFA Leh took the early lead in the 15th min but could not maintain the lead as SFA Jammu scored the equaliser in the 22nd min. The first half ended at 1-1. SFA Leh scored their 2nd goal in the starting minutes of the 2nd half on a free kick outside the penalty area giving no chance to the opponent goalkeeper. The match ended at 2-1, thereby SFA Leh emerged as Champions of the first Inter SFA League.
Seven teams from various districts participated in the League since SFA has established units in 7 district only which includes Kathua, Jammu, Srinagar, Baramulla, Bandipora, Leh & Budgam.
Among the Guests Mr. Tafazul Hussain, Mr N A Khan, Zameer A Thakur, Prof B A Shah, Iftikhar Lone, Nazir Ahmed, Nuzhat Ara, Nuzhat Gazala, Mubashir Hassan, Ab Majeed Kukroo, M A Khan and other dignitaries were present at the occasion. Later the Guests expressed their views about the initiative taken by JKSSC to empower women in sports and also encouraged players with their encouraging words.
The League was organised by State Football Academy J&K State Sports Council.