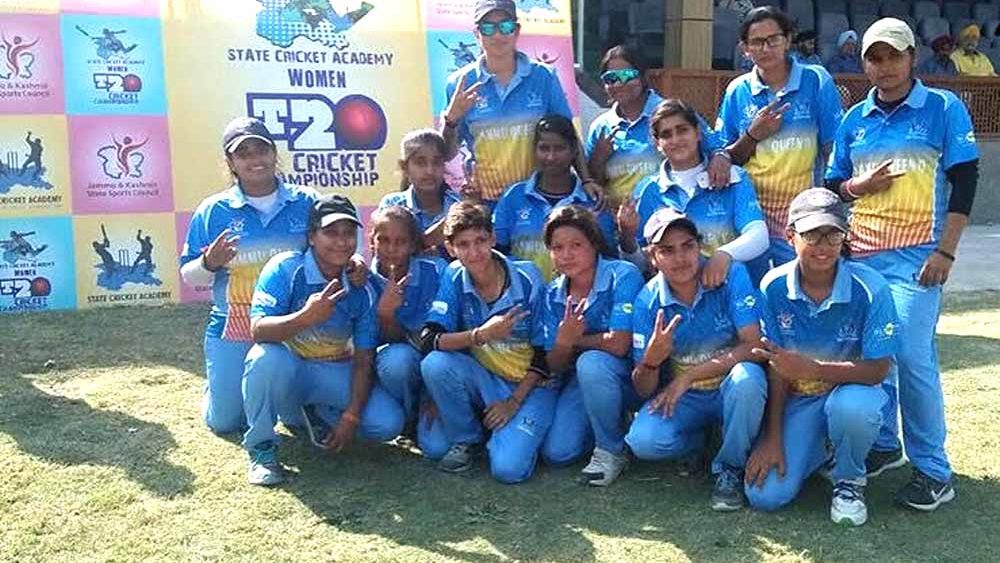 Teams across J&K will compete in the tournament with players from Ladakh competing for the first time in the J&K Women’s T20 Championship.

On the 120th ball of the match, Heena Bhat wrapped up the game with a boundary and gave “Jammu Queens” the lead in the inaugural match of J&K’s first state-sponsored T-20 championship for girls. With over 500 people watching the game in what has, until now been a football field, the ‘Queens’ toppled the Srinagar “Slay Demons” securing a five-wicket win.

Over the next few days, 13 teams from different districts across J&K will compete in the tournament with players from Ladakh competing for the first time in the J&K Women’s T20 Championship, at Srinagar’s Bakshi Stadium. So far three matches have been played and the tournament has already generated lot of enthusiasm among the cricket buffs.

With the lack of infrastructure and limited opportunities to play professionally, the players were ecstatic to be given the opportunity to participate in a tournament. “With no coach and no grounds to practice in Ladakh, this is the first break and a big opportunity for us,” Tsering Wangmo, team in-charge for the Ladakh team told The Indian Express.

The 15-member team, all between 15 and 17 years of age, was put together from schools in Leh as soon as the sports council’s office in Ladakh was informed of the tournament. “I had no trouble convincing anyone’s parents to send them for the tournament because they realised that the scope of this opportunity. This is the first women’s cricket team from Ladakh and they have never played professionally before,” Wangmo added.

However, players from Jammu and Kashmir also rue the lack of infrastructure for women sportspersons. “There just aren’t enough tournaments for players to polish their game. However, championships such as these will go a long way in encouraging more women to play,” Rupali Salathia, coach for the Srinagar women’s team said.

Secretary J&K Sports Council, Waheed Parra stated that the idea behind the tournament was “to involve women in sports create an inclusive culture of sports and give a space were girls feel that they are in charge of themselves and don’t need to be scared of anything. They are talented and can compete at larger levels. Locally, nationally and internationally.”

Adding that both CM and sports minister are of the idea to promote women sports in state and we are taking it to ground, Parra added there is a challenge that needs to be addressed, about girls not being able to express themselves and sports provides an avenue for that in some measure.

Meanwhile, woman of the match 17-year-old Heena Bhat, who made an unbeaten 60 runs for the winning team said, “I play in any park in Jammu, there are no training grounds for us. I have attended under 19 camps and trained with national level players and realised that we need to keep playing more games.” There was no trophy for her today, just her name over the microphone. However, winning days such as these are their own reward, for her and her team.