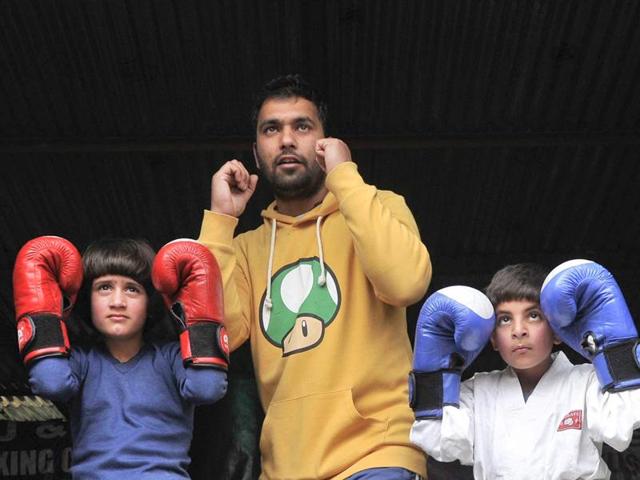 Packing a punch: Sports academy in Kashmir beats odds to churn out champions

Days after eight-year-old Tajamul Islam created history and brought laurels to her state by winning gold at the World Kickboxing Championship in Italy, a small hamlet in Bandipora in restive north Kashmir is grooming another champion.

Despite the unrest in Bandipora and other parts of Kashmir since the killing of Hizbul Mujahideen commander Burhan Wani on July 8, the duo has been training hard at a small village academy, Alli’s Sports Academy to make their mark.

Run out of a tin shed behind a sports stadium built by a construction company, all that the Academy has is a few mats, some gloves which children wear in turns, a few footballs, and some punching bags as their sports gear.
Faisal Ali, who runs the academy free of charge along with his volunteers, says equipment and uniforms come from donations made by some good Samaritans.“Many times, however, I had to chip in from my own pocket,” he adds.
Prize money that the academy wins in various competitions, is another source of funding, he points out.
Around the wee hours of the morning, the stadium comes alive with kicks and swings and punches. The air is filled with giggles and cries of victory and loss, and of fun and frolic.

An international martial artist, Ali has made it his mission to train children, not only of his village, but the entire Valley, in various sports.

Hundreds of children, of all age groups, turn up to learn sports, from football to Taekwondo and kickboxing. Most of them compete at the state and national level, with no funding or monetary support. “Even the other coaches don’t take a rupee to coach the kids,” he says.

Having trained hundreds of children, Ali says even adults are welcome and stressed on how sports can play be a positive influence on especially children in conflict-hit Kashmir.

“The situation in Kashmir is so bad that sports becomes all the more important for healthy development of these children,” he says.

Tajamul, daughter of a driver, who joined the academy in 2014, is all praise for her Ali sir. “My sir helped me a lot,” she says.

Ali had taken her into his house and trained her there before the World Championship even as the rest of the Valley remained shut due to unrest.

“She had been selected for Italy and I was confident of her winning gold. But she needed training. So I asked her family to allow her to stay with my family at my house,” he said.

Ali’s newly-wed wife and his parents took care of the eight-year-old as she spent hours in practice.
For Hashim a class 3 student who began training a year back, the reverence for Ali is the same and he is excited about his teacher is accompanying him to Delhi for the Asian youth karate championship. Ali said a local contractor and a police officer are helping in his stay in Delhi.

“My domestic life and earnings take a beating, but this is my passion, I can’t help it,” he says.