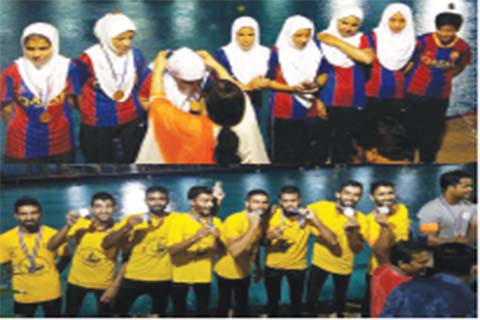 SRINAGAR: Bilquis said that the medal winning performance by J&K players in national event has again proved why Chief Minister Mehbooba Mufti emphasizes on the development of water sport.

J&K men’s team that was unbeaten in group stage lost its first match of the event in final and had to satisfy for the silver metal. J&K Women’s team bagged bronze medal.

In the event that was organized by Indian Kayaking and Canoeing Association, 14 teams hailing from different parts of India took part. J&K team comprised of 16 players that included eight male and eight females.

In the group stages, J&K men’s team played three matches and emerged winner in all of them while as female team won two out of three.

J&K Water Sports coach Bilquis Mir who left opportunity to train Indian team for preparing J&K team for the event expressed happiness over the results of both teams.

“I am happy with the performance. My trust in these players proved right as I left chance to be with India team for my home State. I am thankful to Secretary Sports Council Waheed ur Rehman Parra for all the support he has given to water sports team during past one year,” she said.

Bilquis said that the medal winning performance by J&K players in national event has again proved why Chief Minister Mehbooba Mufti emphasizes on the development of water sport.

During the event three J&K players were selected for India Camp for the upcoming Asian Championship.