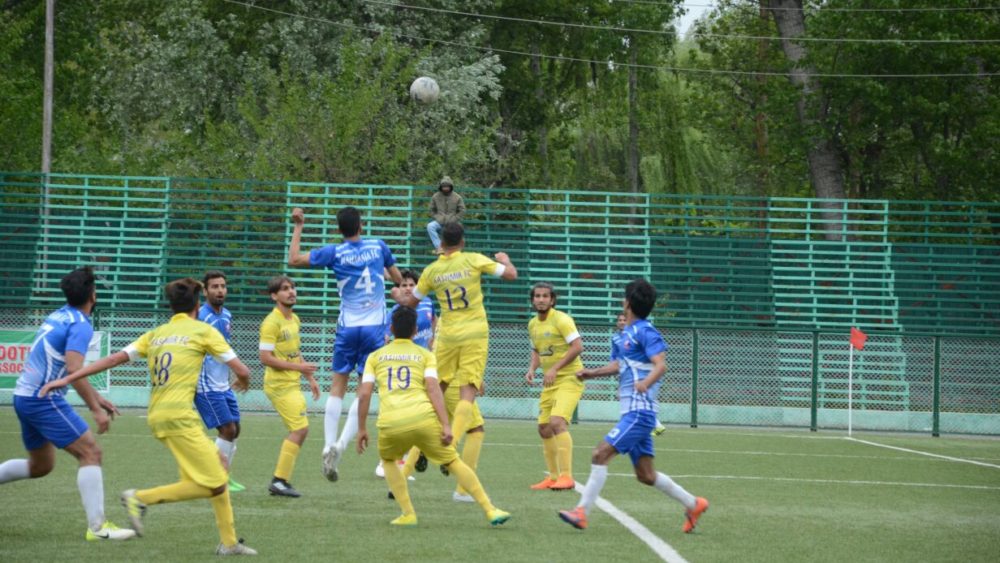 B-Division matches on in Jammu
Srinagar: In the ongoing first Mufti Mohammad Sayeed Memorial (MMSM) Football tournament, Lone Star KFC defeated Maharaja Sports by two goals to one in a match played at Synthetic Turf, TRC Ground in Srinagar on Thursday (April 19).
The only mach of the day, started at 4 pm and a large number of football fans had gathered at the venue to support their favourite teams. Whole Lone Star KFC is a star studded team, Maharaja Sports players are known for their ability to till the last. The match turned out to be a classic as both the teams displayed the skills and cool temperament throughout the 90-minutes of the play.
In the first 19-minutes of the match, both teams attacked each others’ goalpost frequently, but the defence lines withheld the pressure and didn’t allow any goals to be scored. It was Faisal Gulzar, who broke the jinx in 20th minute of the play when he opened account for Lone Star team.
However, despite conceding a goal, the Maharaja players continued to play attacking football and they were rewarded in 39th minute of the play when Jazib scored an equaliser. For the next six minutes of the first half, both teams made desperate attempts to take lead before the end of 45-minutes play, but failed to do so. The first half ended with score line reading 1-1.
The second half also proved to be mouth watering as no team was ready to give even an inch. Attacks and counter attacks was the hallmark of the match. In 53rd minute of the play, Dashyaang Kachru second goal, putting Lone Star team ahead again. Immediately, the Maharaja players launched several counter attacks, but the goal keeper of Lone Star ensured no damage was done.
In the last 10 minutes of the play, both teams made several attempt to score but couldn’t cross the last hurdle. When the referee blew the final whistle, the score line read 2-1 in favour of Lone Star KFC. Dashyaang Kachru was declared player of the match and was awarded Rs 1000 and a memento.
Meanwhile, in Jammu region the matches of the event are going on in full swing at different venues. In a B-Division match,   Cantt. Star FC  thrashed   Baba FC by four goals to nil in a one-sided affair. The match was played at GGM Science College, Ground in Jammu. Hundreds of spectators witnessed the match.
While in Kashmir region, first and the second leg of the event, being organised by the JK Football Association (JKFA) under the auspices of State Sports Council and on the directions of All India Football Federation (AIFF).
The aim of the tournament is to unearth the hidden talent in all corners of the state including remote areas. In Srinagar district 104 clubs/teams participated in the first phase of the event and 280 matches of premier division, Super division, A, B and sub junior categories were held between August and December 2017.