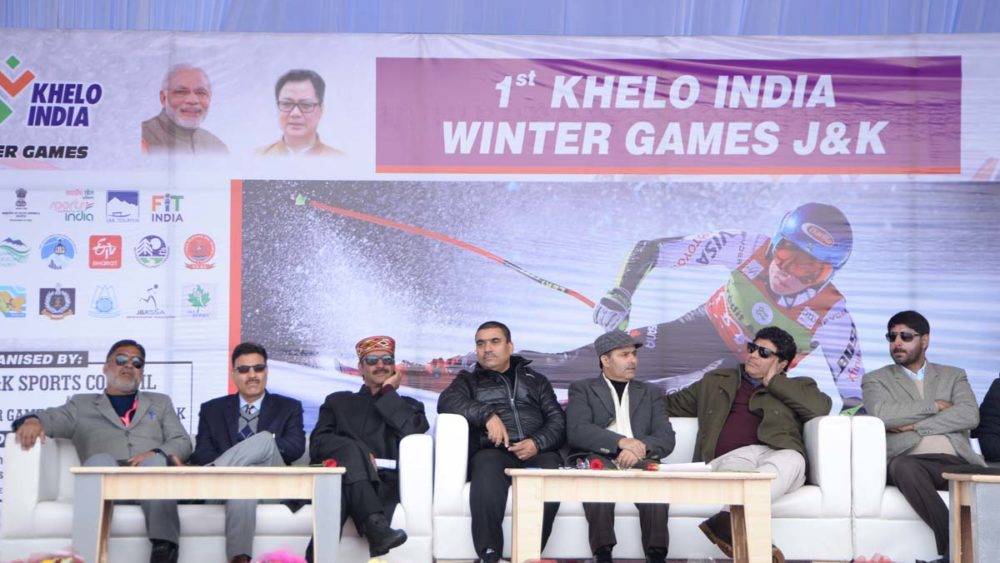 Gulmarg: The five-day first ever winter games—a chapter of Khelo India concluded here today after witnessing flurry of nail biting competitions on the snow-laden turfs and slopes at the famed winter sports destination-Gulmarg.

In this regard, with an aim to felicitate all the best performing players who performed during the 5-days long first ever Khelo-India winter Games at the world famous tourist destination Gulmarg, an award cum felicitation ceremony was today organized here with Secretary, Youth Services and Sports, Sarmad Hafeez as the chief guest, while as Director General Youth Services and Sports, Dr Saleem-Ur-Rehman, Deputy Commissioner, Baramulla, Dr Ghulam Nabi Itoo, Secretary Sports Council, Dr Naseem Javaid Chuoudhary, President, Winter Games Association, J&K, Abbass Wani, and other senior officers of the Youth Services and Sports Department besides senior officers of police and administration were present on the occasion.

After getting off to flier, J&K teams and players concluded with the highest first positions and gold medals.

Pertinently during the five-day long event, about 900 players including 430 outsiders and 470 locals participated in various sports activities including Skiing, Snowboarding, Snowshoeing, Ski Mountaineering, Skating, Ice Stock, Snow Rugby, Snow baseball etc. The event was organized by Winter Games Association of J&K along with J&K Sports Council with active support from Ministry of Youth Affairs and Sports, Government of India.

“Jammu and Kashmir has a huge potential in sports sector and Government would do everything possible to upgrade the sports infrastructure and sports ecology,” he said. “He said that sports can be a real game changer and our focus remains on getting more youngsters to play best sports and produce Olympians.”

Reiterating upon the commitment of providing best platforms for channelizing the potential of our youth, the Secretary said that Government was further aiming to upgrade infrastructure, community sports, talent identification, coaching for excellence, competition structure and the sports economy.

In his address, Saleem-ur-Rehman hailed the contribution of Government of India (GoI) for holding such mega sports activities in Jammu and Kashmir. He complimented the participants for showing their vigorous and enthusiastic participation and said that sports activities inculcate discipline and positivity among the youngsters.

On the occasion, Secretary, Jammu and Kashmir Sports Council, Naseem Javid Choudhary, said that the mega sports event showcased Kashmir in a big way at the national level and participants would certainly become Kashmir’s brand ambassadors—especially Gulmarg which is known as abode of flowers and its slopes are considered one of the world’s best ski slopes in the world which attract foreign and domestic tourists and skiers. “We are happy that we could make this event happen on a very successful note,” he said. “Once the participants from all across the country go back, they will act as brand ambassadors for us,’’ he said, “I wish them all the best in their future endeavors,” he added. “Government had fine-tuned all the preparations for participants at Gulmarg,” he said.

The national winter games as part of Khelo India Winter Games were held from March 7 to 11.

“We have really enjoyed being part of the event and seeing national and local participants giving their best,” Director General, Youth Services and Sports, Saleem-ur- Rehman said.

The event has helped the Government to showcase Kashmir’s Tourism potential, besides the talent of the participants on the snowy slopes.

This season Gulmarg witnessed the first snowfall as early as November 6 and the series of snow spells have attracted many foreign skiers towards the icy heights of the meadows where skiers who could be seen skiing from upper ridges towards the picturesque bowl in the valley which is now under about five feet of snow.

In snow-draped Gulmarg, the gondola, one of the Asia’s largest and highest cable-car ringed by pine forests and snow-capped Himalayan mountain peaks, takes skiers and snowboarders to the height of 3900 to 4100 meters in the Apharwat mountain.

It may be recalled that Union Minister of Youth Affairs and Sports, Kiren Rijiju had inaugurated the mega sports event, saying that Government of India was mulling to bolster sports ecology of Jammu and Kashmir, saying that Kashmir would be hub of winter games.