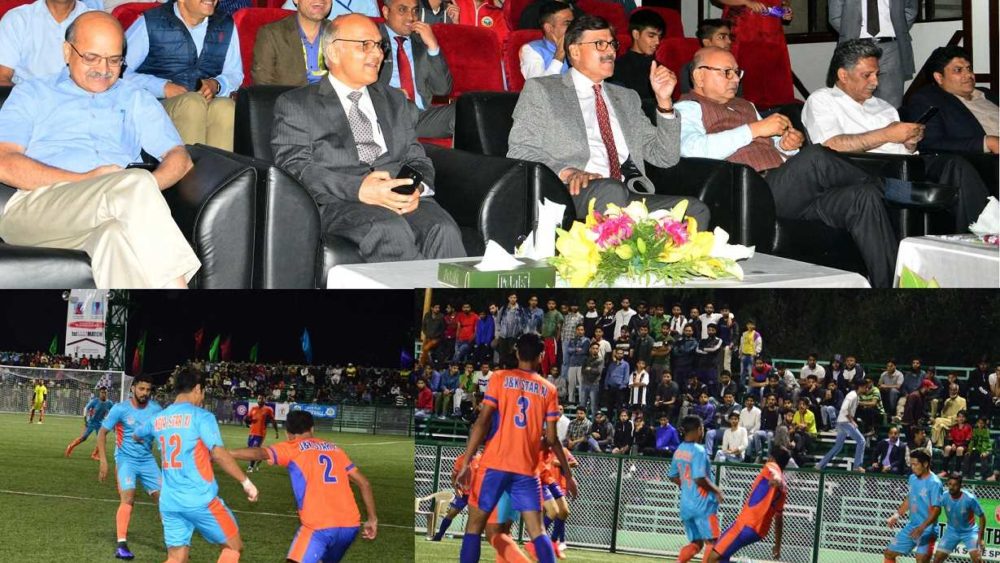 Amid cheering of crowd, the capital city today witnessed star football players of the country—playing an exhibition match under floodlights between Indian Stars XI and JK Stars XI at AstroTurf Football ground, TRC Srinagar.
Former India players Bhaichung Bhutia, Renedy Singh and Mehrajuddin Wadoo featured during the match as Jammu & Kashmir got its first floodlit football ground.
“This is a moment of joy for all of us,” said the local players. “We want government to create more such facilities so that youth have options to display their sporting talent,” they said.
Advisors to the Governor, K. Vijay Kumar, K.K Sharma, Khurshid Ahmad Ganai, Skandan Kumar and Chief Secretary, BVR Subramanyam inaugurated and unveiled the first ever floodlight facility at the AstroTurf ground at TRC, Srinagar.
The Advisors were accompanied by Deputy Commissioner, Srinagar, Dr Shahid Iqbal Choudhary, Secretary Sports Council, Dr Naseem Javid Choudhary, Director General, Youth Services and Sports, Dr Saleem Ur Rehman, SSP Srinagar, Haseeb Mugal, and other senior civil and Police officers.
All the Advisors interacted with the young students, sports enthusiasts and nationally repute footballers—urging them to play their role in bringing back the momentum of sports across the State.
K. Vijay Kumar urged youth of Jammu and Kashmir to acquire education and participate in sports to ensure proper development of their persona. He said that youth and the sporting talents of the state should take the benefit of the opportunity being provided to them by the government. “Many sporting talents don’t get a chance to showcase their abilities at different levels. Now we are giving opportunities to the youth and sporting talents of the state. I believe that the youth of Jammu and Kashmir can change the future course and their own fate through sports,” Kumar said.
Meanwhile Advisor to Governor, Khurshid Ahmad Ganai inaugurated other sports facilities including modern dressing room and State Football Academy office complex.
Besides honoring State Football Academy under 13 and under 15 players, graduation certificate of State Football Academy under, 18 and boys teams were awarded by Advisor Skandhan and chief Secretary BVR Subrahmanyam.
The event concluded with power-pact, thrilling, football match between India Stars XI and JK Stars XI—who were honored in pre-match ceremony by Advisors Chief Secretary.
The 15,000-capacity stadium was developed in 2014 and has been the home ground for both the clubs from the city – Real Kashmir FC and LoneStar Kashmir. While Real Kashmir plays in the I-League, LoneStar are in the 2nd Division I-League.
Former India international Mehrajuddin Wadoo headlines the JK XI team which also includes former player Ishfaq Ahmed. Both Ishfaq and Wadoo emerged from the valley in 2000s to turn professional in the game.
Both have turned out for Kolkata giants Mohun Bagan and East Bengal in the playing days. While Wadoo is involved in the FC Pune City academy as the U19s coach, Ishfaq is currently serving as an assistant manager to Eelco Schattorie at Kerala Blasters in the Indian Super League (ISL).