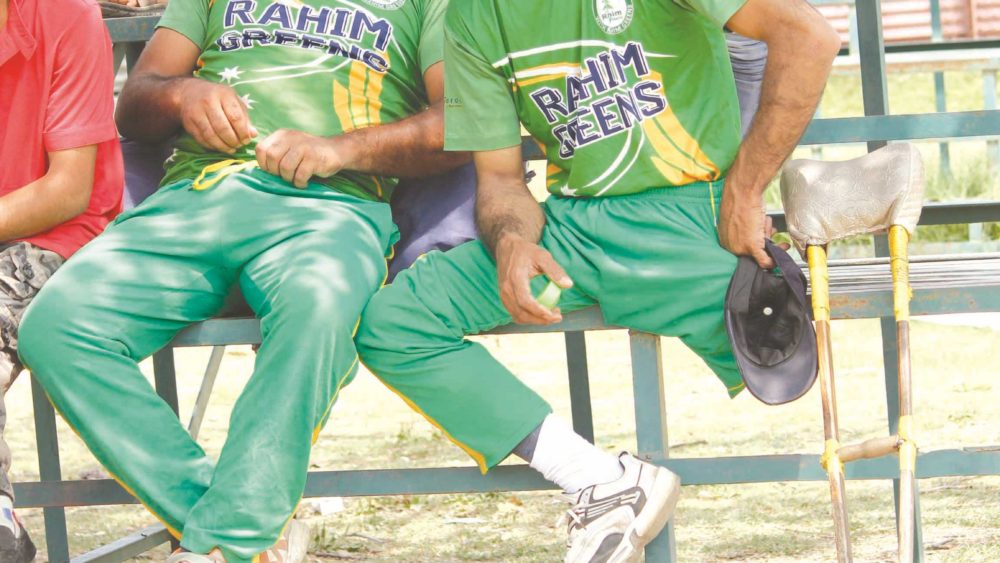 Srinagar: Losing a limb when he was just a three-day-old baby did not come as a hurdle for Shabir Ahmed Bhat to become Lara of the game of cricket in the Kashmir valley.
Shabir, 35, a resident of Hazratbal area of Srinagar district, had to get his leg amputated when a Kangri, the Kashmiri firepot, fell on his leg leading to severe burns.
With the infection spreading quickly through his tender body, the doctors instantly operated upon him and amputated his left leg to save his life.
Shabir without fail has played around 300 innings in local tournaments.
Shabir, whose inspiration in the game of cricket has been Sachin Tendulkar, for he being an honest and a humble cricketing professional is also much awe of Virat Kohli for his aggressive batting style.
“Sachin has always impressed me as a professional and as a human being. I have grown up watching his cricketing skills and you can very well call him my inspiration. Now, I cherish the innings of Virat Kohli, who in my eyes is a good batsman. Since my childhood I have been associated with cricket and until I am alive, I will be playing this game. My disability never came as an obstacle for me in my life and never on the cricketing field”, says Shabir Ahmed.
Shabir has always moved on with a never say no attitude which earned him a nickname, Lara, for being an overall all rounder. He has inspired many over the years, says one of his team mates.
“I have been playing with his team, Raheem Greens Hazratbal, for last five years now. It is Shabir Bhai who inspired me. When I was a kid and used to see him play cricket on the mats that too with a leather ball, I thought if he can push so hard, what could stop us to take on the play field. My first inspiration is him only and under his guidance we all have improved a lot,” says Mushtaq Ahmed Raja.
Shabir, who earns his livelihood by working as a salesman, however is very upset with the response of the government all these years. Despite playing around 300 innings in local tournaments, he was never included in the state para cricket team.
“I have been playing for years now and despite several stories by local and national media outlets, I never received any positive response anywhere. Many media men even promised to take up my case with the concerned people but till date I have faced disappointment and I wasn’t even considered for my state team. I am highly thankful to Hamid Sahab, owner of Rahim motors, who through his initiative of Raheem Greens, provided uniforms, cricketing kits and takes care of all our expenses since long now. It is all because of him that we are able to travel to places and participate in the tournaments,” adds Shabir.