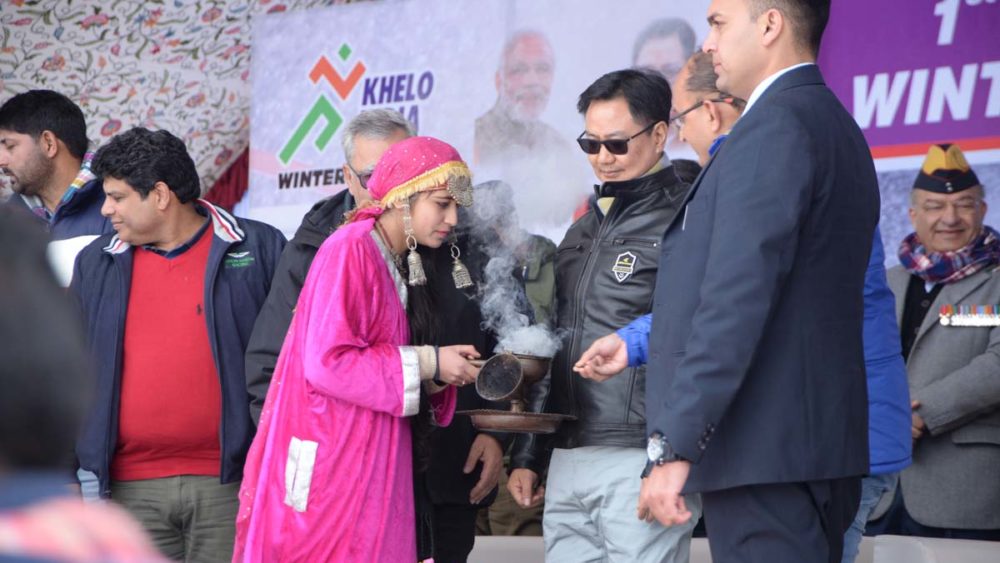 Kashmir will be hub of winter games: Kiren Rijiju

JK to get Centre of Excellence in winter sports

Gulmarg: Union Minister of Youth Affairs and Sports, Kiren Rijiju today Government of India was mulling to bolster sports ecology of Jammu and Kashmir, saying that Kashmir would be hub of winter games.

Inaugurating the maiden first-ever Khelo India Winter Games,—a chapter of Khelo India at famed ski-destination Gulmarg, Rijiju said that Jammu and Kashmir has a huge potential of sports sector and Government would do everything possible to upgrade the sports infrastructure and sports ecology of the Himalayan region. He said that with an aim to promote winter sports in India, the Government of India would setup National Excellence Center of Winter Sports in Gulmarg.

“It will be a residential facility funded by GoI where professional winter games athletes will be trained here for world class competitions,” he announced, amid huge round of applause from the participating athletes and guests.

The Union Minister said that Government would encourage interested athletes or retired sports veterans for setting up sports centers across Jammu and Kashmir.

“Coaches of different sports categories will be given Rs 5 Lakh for setting up sports centers across J&K,” he assured, adding “It will not only help us to identify talent and hone their skills in various sports but will be a source of employment.”

Saying that J&K has a huge talent, he complimented the local players for bagging medals in various national and international events.

He said that this is a historic event not only for J&K but whole country.

“Those who are here today at this place are lucky. This is a beginning of mega sports events in Gulmarg. More mega events are in pipeline for this place,” he said and was followed by bug applause from audience.

He credited Prime Minister Modi for starting Khelo India which is aimed to handhold raw talent till they are set for bigger competitions.

Union Minister said he is hopeful that with the culmination of event, footfall of tourists will increase.

The Union Minister expressed that he was impressed with the enthusiasm shown by the athletes in today’s event. He said he will be again in Srinagar to do some mega event in water sports.

On the occasion, Chief Guest was presented memento by Advisor to Lt Governor Farooq Ahmed Khan.

The Union Minister was enthralled by the performances of the artists of Jammu and Kashmir academy of art culture and languages.

Extending invitation to sports and nature lovers, the minister said the travellers are missing out on big thing if they are not here in Kashmir.

“Travellers should come and feel the natural wonder here. Only then they can realise what paradise on Earth is,” he said.

He said the winter games will give a big fillip to tourism industry here.

He said tourists don’t need to go to Europe when Kashmir is just in the country. “Travellers should come here and enjoy the beauty and also fun-filled winter activities.”

The officials said that this is not just a sports event but an opportunity to showcase Jammu and Kashmir and its various attributes.

Notably, there are about 30 events including snowboarding, snow skiing, cross country and snow show in which players from across India are participating. Besides this, snow cycling and other games are also held for the local children.