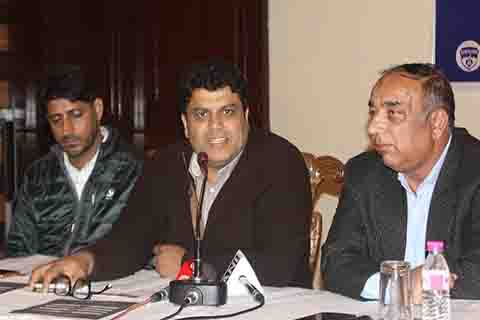 The Administrative Secretary assured every possible help from the State Government in polishing sports talent of those footballers who play with dedication, better technique and sportsman spirit.

Secretary Youth Services and Sports Sarmad Hafeez today said that Government is committed to providing each and every support needed for boosting the football infrastructure across the State enabling youngsters to showcase their talent at national and international levels.

He made these remarks while addressing a press conference here regarding the announcement of Jammu and Kashmir Invitational Football Cup, which will commence from 17 October 2018, at the TRC Turf football stadium.

While highlighting the importance of such events for the development of better football culture in the State, he further stated that the J&K Sports Council and J&K Football Association is leaving no stone unturned in tapping sports talent in the valley and one can easily foresee a better atmosphere for games and sports in the days to come.

Hafeez informed that the construction works of Bakshi stadium will be completed upto March 2019 at an estimated cost of Rs 44 crore. He said that the valley will soon get its first football stadium as per FIFA norms complete with floodlights. In addition to it, indoor stadiums are coming up in every district across the State at a cost of Rs 4 crore each and by the end of next year, they will be ready to host indoor games facilities for the youth. Government is upgrading facilities with floodlighting at TRC turf football stadium. In November-December, I-League football matches will be played there and best teams of the country will play their matches at TRC turf which will change the perception about the sports in the valley.

He said that Kashmir players are genetically suited for football and the valley’s climate is also feasible for the game. Real Kashmir football club has a Scottish coach and J&K Sports Council is roping in best coaches from outside the State so that national and international level football players are produced from the State. Recently, Tata Trust trained 120 girls of the state for football coaching.

The Administrative Secretary assured every possible help from the State Government in polishing sports talent of those footballers who play with dedication, better technique and sportsman spirit.

President J&K Football Association Zameer Ahmad informed that as a trailer to the I-League, senior football league to be hosted in the valley in November, the J&K Football Association and J&K Sports Council are jointly organizing the ‘Kashmir Invitation Cup 2018’ from October 17 to 23 at the TRC turf football stadium. Four participating teams from the country include Minerva Punjab FC (I-League champions), Bengaluru FC (ISL team), Delhi United FC and Sudeva FC (2nd Division I-League Teams). Four local teams in the event are I-League 2nd division champion Real Kashmir FC, State’s first I-League team Lonestar Kashmir FC, State Football Academy and J&K Bank FC. The tournament will be played on a knockout basis, with direct quarterfinals to be played from October 17th at 2 pm. The first match will be between Real Kashmir and Delhi United FC. All regulations will be followed as per FIFA and AIFF standards and referees will be deputed by AIFF for this event. Some of the best football players will be playing in this knockout tournament and the football loving fans of Kashmir are expected to watch some high voltage matches.

DG Youth Services and Sports Dr Saleem-u-Rehman, Secretary J&K Sports Council, all members of J&K Football Association and other concerned officials were present on the occasion.