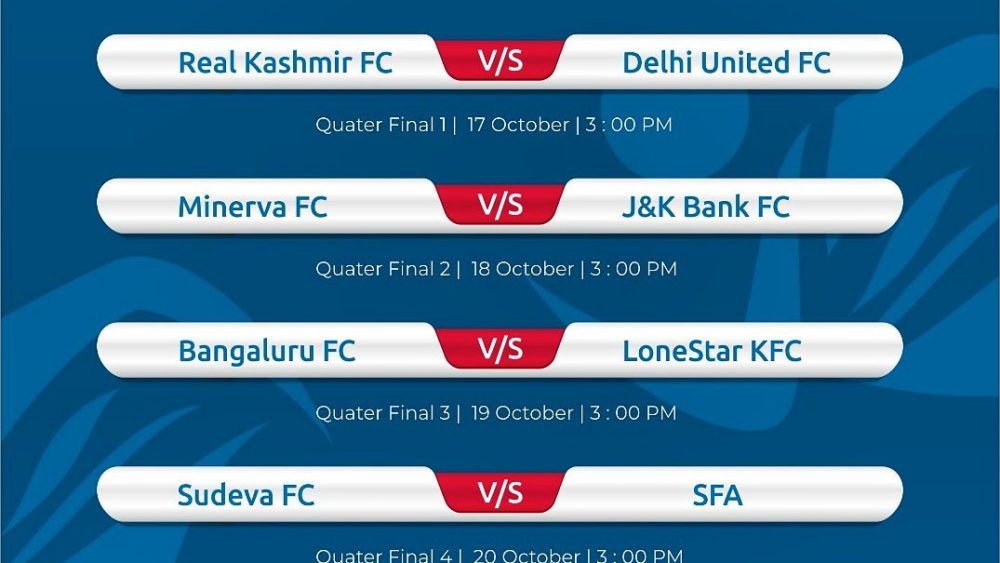 SRINAGAR: The stage is all set as the valley would be hosting Kashmir Invitation Cup-2018 at Synthetic Turf TRC ground here from October 17 to 23. Top football clubs of the country like Bengaluru FC, Minerva Punjab FC etc. along with four football clubs from the State are participating in the event. The event is jointly organised by J&K State Sports Council and J&K Football Association.

The inaugural match of the tournament will be played between Real Kashmir FC and Delhi United on Wednesday. In the second match, Minerva Punjab will clash with J&K Bank on Thursday while as Bengaluru FC will clash with Lonestar Kashmir FC in the 3rd match on Friday. Sudeva FC will take on SFA on October 20 in the last quarterfinal of the event.

“Football is the heartbeat sport of J&K and through this event, we aim at giving football-crazy fans of Kashmir top quality football to watch. We are hopeful that the event will turn out to be a success with fans coming out in large numbers to watch and support the best teams,” Sarmad said.

He said that football is considered number one sport in J&K and we are trying to revive the football culture in the state.

“Real Kashmir FC last year made us proud by becoming the first-ever club from the state to qualify for the I-League. Historically, we have produced a number of international footballers in the state and hope to continue our legacy. We are also trying to develop football at grass root level by launching football academies across the state,” he said.

When asked about J&K not being able to produce any international footballer for more than a decade and also J&K team not able to qualify for the knockout stage in the Santosh trophy, he said, “Yes, these are the areas of concern and there is a need to look into the issues. I am sure that J&K Football Association will work on these areas”.

He also said that the FIFA standard Bakshi Stadium football turf that would be ready in March next year will give a boost to football activities in the state.

“Bakshi Stadium is under massive renovation work at present and once ready, it will be of FIFA approved international standard. We currently have one synthetic turf football field in the state and in March 2019 we will have two, as Bakshi Stadium is expected to be ready by then. Besides floodlights it will have all the other modern facilities,” he said.

Sarmad also said that soon after the tournament, top I-League clubs of the country including Mohun Bagan and East Bengal would be visiting Kashmir to play against Real Kashmir FC as the latter would be hosting all its matches at TRC Ground.

“It is just the beginning of a long footballing feast for the football fans of the valley. The Invitation Cup will act as an appetizer before the actual feast begins on November 6, when Real Kashmir FC will host Churchill Brothers FC Goa in their first home match of the season. In total, Real Kashmir FC will be hosting 12 home matches in Srinagar while playing against top football clubs of country in I-League,” he added.