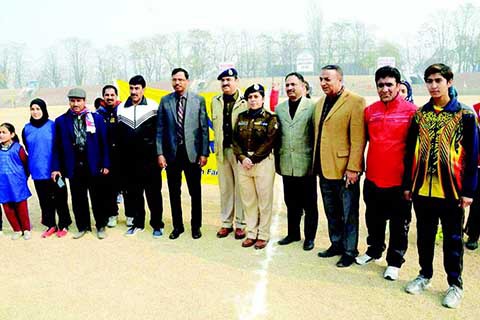 Football back on track with girl’s event kickoff

After a hiatus of nearly four months amid current unrest, football in Kashmir on Saturday jumped back on track with the girl’s football tournament kicked off at Bakshi Stadium.
The event is being organized by Srinagar sector, Central Reserve Police Force (CRPF), in collaboration with J&K State Sports Council and J&K Football Association (JKFA).

In her welcome address, Commandant 75 battalion CRPF Madhuala, highlighted the participation of girls in sports, commitment of CRPF towards promoting peace, harmony and women empowerment in a healthy way.
Deputy Inspector General Srinagar (South) CRPF, KK Sharma, was Chief Guest on the occasion and declared the tournament open in a colorful ceremony.  Mushtaq Ahmed, OSD State Sports Council, President JKFA  Zameer Ahmed Thakur, Secretary JKFA, SA Hameed, Mushtaq Ahmed Divisional Sports officer and senior CRPF officers were present on the occasion.
It is after long wait of four months that any major football event has been organized in Srinagar. After the unrest started in Kashmir on July 7 following the killing of Hizbul Mujahideen Commander, Burhan Wani all the sports activities in Kashmir had come to halt with football being no exception.

In the event ten football teams are participating and it would be held for three days. Apart from club level sides, three institutes Malinson Girls School, Presentation Convent and Women’s College MA Road are also participating.
“The event was originally planned for April. However, initially due to bad weather conditions and then the Kashmir Unrest it got delayed. It is major girl’s event that JKFA is technically supporting.
Despite cold weather three matches were played on the inaugural day of the event that was mostly watched by participating teams and the officials conducting tournament.
According to football officials the initiative is basically a step forward to groom girl’s footballer’s in Kashmir.
Basically it is an initiative taken long back to groom the girls footballer’s of the Valley who normally shy away from the game. Due to unrest it took back step but now football association, sports council and CRPF has re-initiated the process.
Though JKFA is almost trying to stay away from the limelight and claims that they are only technically supporting the event, fact is that without their support event would not have become a reality.
JKFA is the organizing body while as CRPF is sponsoring agency. Sports Council is providing infrastructure. All the teams, officials, referees have been managed by JKFA for the event.
JKFA is all set to organize another major tournament in collaboration with CRPF at Bakshi stadium from December 5 in which 30 teams are participating.
The things have just started to kick off as for as activities are concerned. JKFA is all set to organize major football event in Bakshi Stadium from December 5. The event would be knock out format in which 30 teams that are registered with JKFA would be taking part.
After a long hiatus, it has been around one month that sports activities across Kashmir have started to gain momentum. State Sports Council, JK Police, Army, CRPF, Associations have all initiated the process of organizing sports activities across valley. However, organizing of the girl’s football tournament is first major sports activity held in Srinagar after July 7 incident.