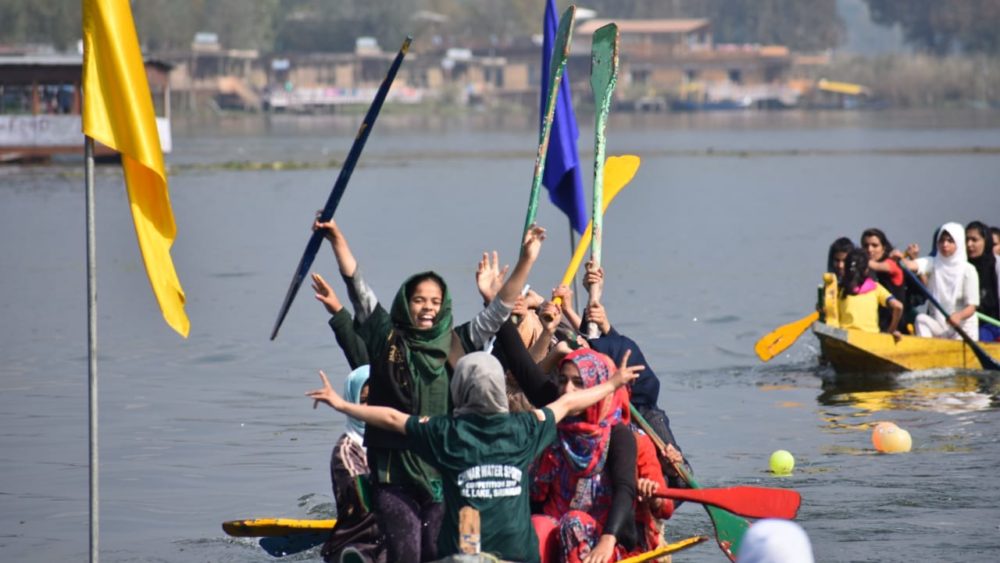 Water sports is an Olympic discipline sport that has given the state maximum number of national medals.

In a major step towards popularizing water sports in entire State, first of its kind district-level water sports Championship commenced on Thursday at Water Sports Centre Nehru Park. On the first day, competitions were held in Kayaking, Canoeing, Dragon Boat and Canoe Polo.

350 players from Anantnag, Pulwama, Bandipora, Ganderbal, Srinagar and some players from Jammu province are also taking part in the event. Pertinently, girls are equally active in this championship as the player participation ratio remains 50:50. The number of participants is likely to increase during the remaining two days of the championship, which is scheduled to conclude on 20th October, 2018.

Water sports is an Olympic discipline sport that has given the state maximum number of national medals. It has also been the source of livelihood for the players as hundreds of medalists have got Government jobs on the basis of their water sports achievements.

Bilques Mir, international water sports coach and In-charge, Water Sports Centre said, “The initiative has been taken place for the first time in the history. Reaching out to districts will identify the best rural talent who will shine at National/International levels.”

Meanwhile, a large group comprising more than 3000 spectators surrounded the Dal banks to watch the players competing in the games and were seen clapping for the youngsters which also boosted their morale.

Secretary, J&K State Sports Council interacted with the players at Nehru Park and encouraged them for the water sports and extended a hand of support in all ways.

“The district-level championship has been held to nurture the talent at grass-roots and it is happening for the first time where youngsters from various districts are participating in the camp,” said Secretary Sports Council, Dr Naseem Javaid Choudhary.

D.G Youth Services and Sports, Dr Saleem Ur Rehman said, “It will provide a platform to the budding talent to compete at various levels.Talent identification is a must process for grooming them to achieve excellence at district levels and then the same at state level and so on.”