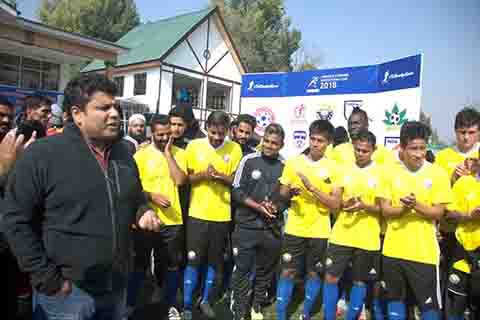 It will be FIFA approved stadium with world-class facilities: Secretary YSS

Sarmad was speaking during the inaugural match of the ‘Kashmir Invitation Cup Football Tourney’ which began at TRC Turf on Thursday. The tournament is being organized by Jammu and Kashmir Football Association (JKFA) and J&K State Sports Council (JKSSC) in collaboration with Youth Service and Sports (YSS) Department.

Further, Sarmad said that Bakshi Stadium is currently under upgradation and several innovative measures are underway to bring it to the level of international sports standards to inculcate sports enthusiasm among the State’s youth. Also, he said that under Rs 44 crore renovation project, Bakshi Stadium is being exclusively converted into a world-class football stadium. “Stadium will be ready by March 2019, and it will be FIFA approved stadium,” he said.

“We have been able to produce national and international level players because people in J&K have lot of interest in football. JKSSC and JKFA are working for promoting sports culture in the state,” he said and added that Bakshi Stadium and TRC Turf Ground would be installed with international standard floodlighting system, which would help in organizing night sports activities. He said it would definitely boost the football culture across the region.  “We are making efforts to produce best players in the valley as foreign coaches are training youth,” Hafeez said.