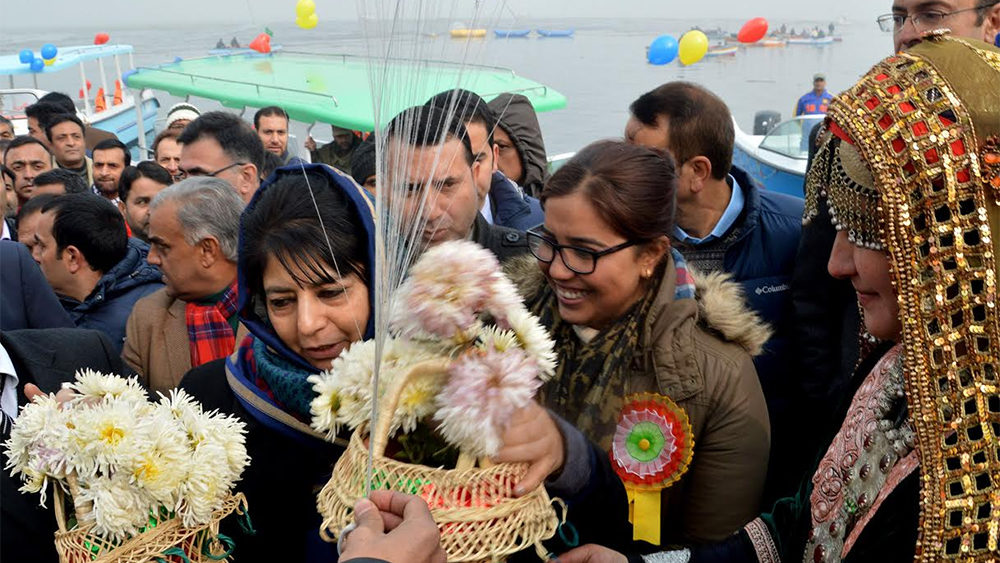 Chief Minister, Mehbooba Mufti today said the Government would take all necessary measures to provide facilities of recreation and adventure to children and youth.
Addressing a gathering here after inaugurating a Water Sports festival, the Chief Minister said she earnestly desires to see the innocent smile back on the face of every kid in the State like in any other civilized society. She said her Government is taking necessary steps in this regard.
The Chief Minister hoped that such events and festivals would not only boost the confidence and morale of JK’s young generation but also groom out of them responsible citizens of future. She said youth of the State have made us proud time and again and there is a need to channelize their energies in positive direction.
On the occasion, Mehbooba Mufti announced setting up of a Water Sports Training School at Srinagar. She hoped with the setting up of the school the adventure and sports qualities among the youth would be further polished and honed. She directed involving the children of Dal and Nigeen areas while imparting training in water sports.
The Chief Minister said Government is contemplating many initiatives to attract more tourists to the State. She said soon a snow festival would be held at Gulmarg to give winter tourism a boost. She said Jammu & Kashmir is an ideal tourist destination in the country, particularly for women and appealed for more and more tourist arrivals.
On the occasion, the Chief Minister also felicitated many young boys and girls who had performed well at the sports festivals.
Present on the occasion were Chairperson of J&K Women’s Commission, Nayeema Ahmad Mehjoor, several legislators, former Deputy Speaker, Legislative Assembly, Mohammad Sartaj Madni, Secretary, Tourism, Farooq Ahmad Shah, Divisional Commissioner, Kashmir, Baseer Ahmad Khan, Inspector General of Police, Kashmir zone, SJM Gillani, Secretary, J&K State Sports Council, Waheed-ur-Rehman Parra, several senior officers, water sports players and a large number of Shikara Wallas.