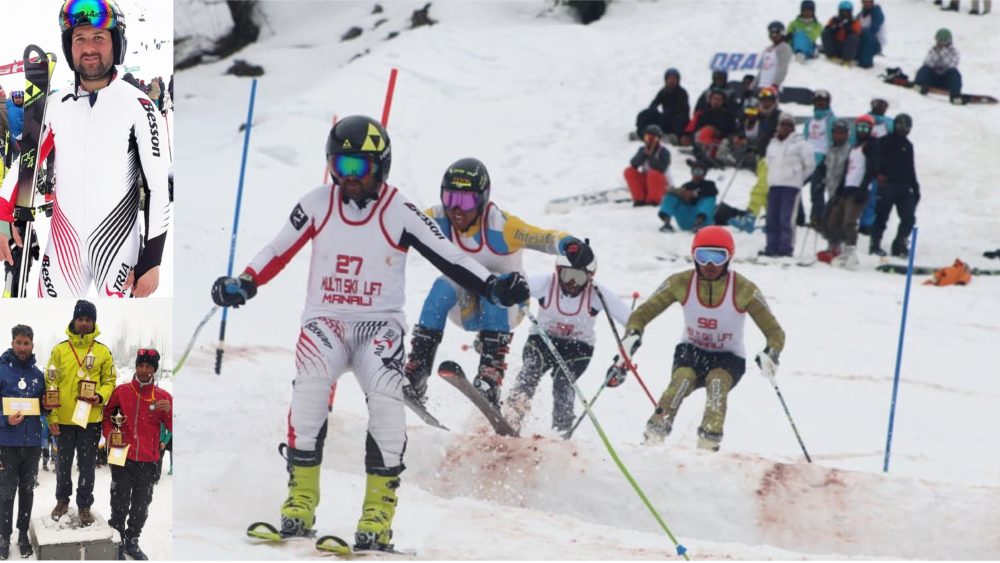 Srinagar: Bilal Ahmad Sheikh of Winter Games Association of J&K has won silver medal in the recently held National Senior Ski Championship at Manali.  He won the medal in newly introduced Cross Ski event, which is considered to be the toughest event in Alpine Skiing.

In the first time trial run Bilal led the race all through the course but in the finals he got second position. Bilal is an aggressive skiers who plays better on rough terrains. In Cross Ski four skiers run neck to neck on rough race course. At occasion this race could be dangerous, if someone slightly hits other competitor while zooming down the slope in fast speed. The race course is laid in such a way that the competitors gain high speed and have to negotiate jumps and ditches created in between the gates.

It was Bilal’s first medal in any National Championship, though he has participated in many earlier. He has won many medals in state and regional championships. Besides medal, trophy and certificate of merit, Bilal was presented a cash award Rs.15,000.

President Winter Games Association of J&K, Abbas Wani has conveyed his congratulations to the athletes who performed exceptionally well in the Championship. He also expressed his gratitude to Mahmood Ahmad Lone, Team Coach, whose guidance proved helpful to the team.

Notably Mahmood participated in an international training program, organized by FIS in Austria last year. He also thanked the male and female managers, Tahir Mir and Nazima for their help to the team. Abbas informed that due to continuous road blockade some of the best skiers and snowboarders could not reach to the venue.

Meanwhile, the J&K Junior ski team has joined the Indian Contingent and has reached to Sakhlin – Russia. They took part in Inaugural Ceremony yesterday. The competitions will be held from today while, Arif Khan and Shabir Wani will leave Delhi for Are-Sweden on Monday to take part in World Skiing Championship, informed by General Secretary WGAJK, Muhammad Yusuf.

He further informed that the Association Officials called on the Secretary Youth Services and Secretary Sports Council at Jammu and requested them to sponsor the proposed National Junior Championship in March this year. Both the officers have shown their willingness to hold the National event this year.