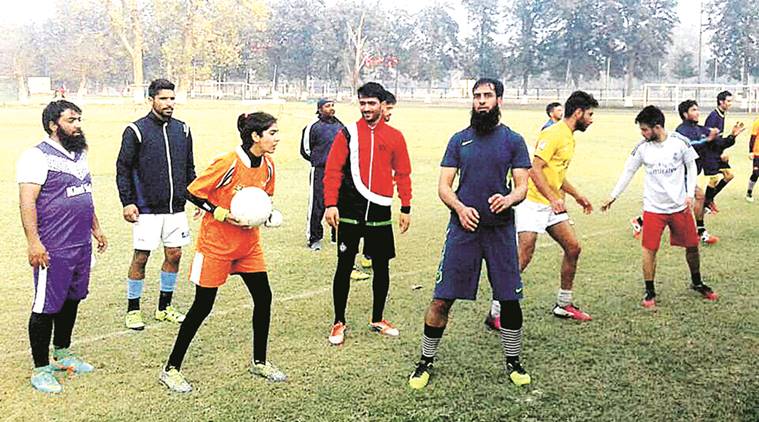 Nighat, a 21-year-old from Srinagar who is training to be a football coach at ‘Asia’s largest sports institute’, says she has fought hard to get here. “When I started playing the game, I faced a lot of criticism from my neighbours and relatives. Only abbu (father) stood by me. Now I hope I can pass on some of the skills I have learned here to children back home. That will make abbu proud,” she says.

Nighat is among 60 people from J&K, most of them from the Valley, who are being trained as coaches at NIS. For many of the youngsters here, this is their first time outside the Valley, which is still recovering from months of unrest following the July 8 encounter killing of Hizb commander Burhan Wani.
Officials say the aim of the programme, which has been drawn up as part of the ‘Prime Minister’s Development Funds for J&K’, is to encourage youngsters in the Valley to take up sports. While announcing the package in November 2015, the Centre had set aside Rs 2,600 crore under the head ‘Human Resource Development, Skill Development and Sports’.

Waheed-Ur-Rehman Para, secretary, J&K State Sports Council, says this is the second batch of 60 that is being trained at NIS Patiala. The first batch completed its training in the last week of December and this batch, which began its session on January 2, will wind up on February 28. “In all, 180 people will be trained at NIS as part of this programme. The idea is that once they go back home, they will train more people in their towns and villages. The government will also try to provide infrastructure in villages and towns of J&K so that they can attract youngsters towards sports,” says Para, adding that the participants are being trained free of cost by coaches who have trained renowned sportspersons such as Mary Kom, Vijender Singh, Krishna Poonia and Geeta Phogat.

Mohinder Pal, chief handball coach at NIS, says that while there are strict criteria for being trained at the institute, some of these requirements have been relaxed for participants under this programme. “Usually, only graduates and those who have participated in at least two national events are selected for training here. But these rules have been relaxed for these students. Some of them have only their cleared their Class 12 and some are studying,’’ he says.

Ali Mohammed Wani, 39, stands in a huddle with a few other participants after the day’s training. Wani is a physical education teacher at a private school in Pulwama, the South Kashmir town that witnessed heavy protests during the recent unrest.

“For me, this was a god-send opportunity,” says Wani, who also runs a football academy for around 40 students. “I am sure I will take back a lot from here that I can pass on to my students. If it wasn’t for this programme, I would have never been able to afford this type of training.”

With Wani is Sheikh Nisar, a resident of Kreeri village in North Kashmir’s Baramulla district, who hopes to be a handball coach and start his own academy in the Valley. “There is only one handball court in north Kashmir and that too in a government college in Baramulla, 25 kilometers away from my village. Recently, I spent some money and prepared a court in my village, where I train a few boys and girls. But after my training, I hope people from nearby villages too come to play at my court,’’ says Nisar, adding that he had tried to get admission at NIS a few years ago but his application was turned down.

While the aspiring coaches are happy to talk about their sport, they clam up at the mention of politics.
“We are sports persons and have nothing to do with politics,’’ says Suhail Wani, a student of Islamic University of Science and Technology (IUST) and an aspiring cricket coach.

Afshan Ashique, a 21-year-old from Bemina in Srinagar, agrees. “For a sportsperson, politics doesn’t matter. Kashmir has so many problems and if I can contribute something through sports, I would be happy,’’ she says.

Participants say the course is helping them pick a few unexpected skills: like reaching out to each other. “When we first came here, we didn’t talk to the Kashmiris,” says Sanjeev Singh from Jammu, who has an international handball match under his belt. “Now, we play and even eat together. This programme has given me a chance to know and understand Kashmiris.’’

As appeared in Indian Express