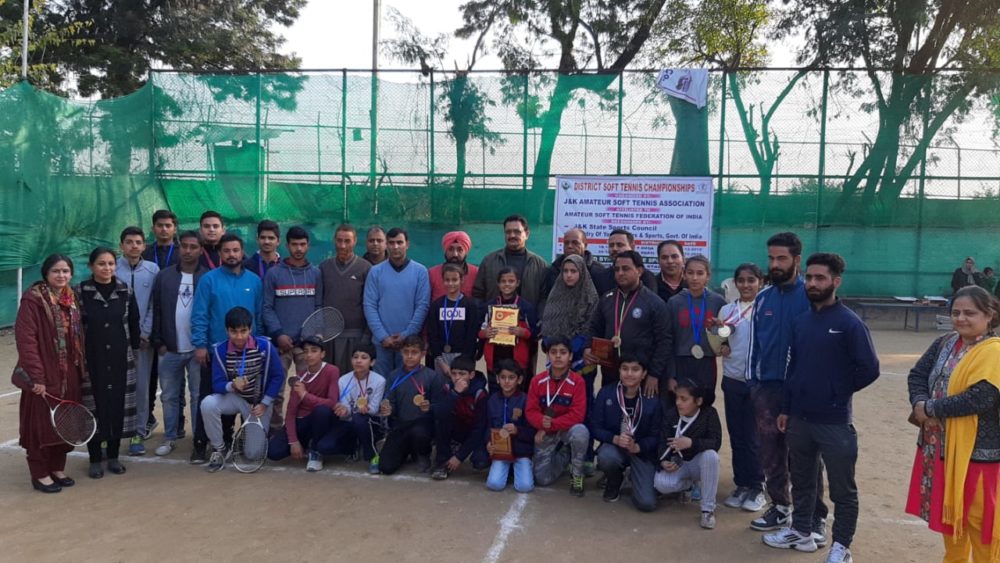 Winners to participate in National Soft Tennis Championship to be held in Orissa
Jammu, December 22: The 4 day district Sub Junior, Junior and Senior Soft Tennis championship for boys and girls organised by J&K Amateur Soft Tennis Association in collaboration with State Sports Council concluded here today with medal distribution among the winners of the competition.
Nearly, 162 sports persons from four districts Jammu, Udhampur, Doda and Reasi participated in this sports event.
The first and second winners of both boys and girls category will participate in the 12th Sub Junior National Soft Tennis Championship to be held at Kalinga sports stadium, Bhuvneshwar in Orissa from 27th to 31st December 2017. Besides, the winners of the same district level competitions from Kashmir will also participate in this national championship. A total of 16 soft tennis players including 8 girls and 8 boys are taking part in the national championship.
The winners participating in the national championship included Sumanyu, Antekshika, Aryan and Sidhani being trained by Coach Indu Bhushan Padha in K.C.Sports club Jammu and Arjuman Ibrahim, Sobaan Yaqoob, Seema Farooq, Munib Ul Islam, Movahid Masroor, Shahreena Farooq, Bazila, Sayed Haider, Arsh Abbas, Aiza, Seerat and Mahvish from Kashmir.
Pertinently, one of the participants of this national tourney Antekshika from K C sports Club, has recently took part in the World Soft Tennis Championship held at South Korea making the state proud of her sports skills in the game.
Divisional Sports Officer, Ravi, who was chief guest on the occasion, distributed medals among the first, second and third winners besides presenting consolation prizes to the runners up. He was optimistic about the success of these players in the National event with hope that they will put in hard efforts to make a name for the state.
General Secretary J&K Amateur Soft Tennis Association, G. H. Hassan, elaborated on the objective of organizing these district level events saying that these are aimed at to promote Soft Tennis in the rural parts of the state by providing the budding sportspersons a perfect platform. He said that it is a matter of great satisfaction that these events are getting tremendous response from all areas. “Soft Tennis game has witnessed a notable progress and promotion in the past few years in the state due to the efforts of the Association and support from the State Sports Council and other stakeholders”, he added.
NIS Coaches Sammer Ahmad Shah and Asif Altaf besides Manager Radia Mohd are accompanying these sportspersons during the national tournament.