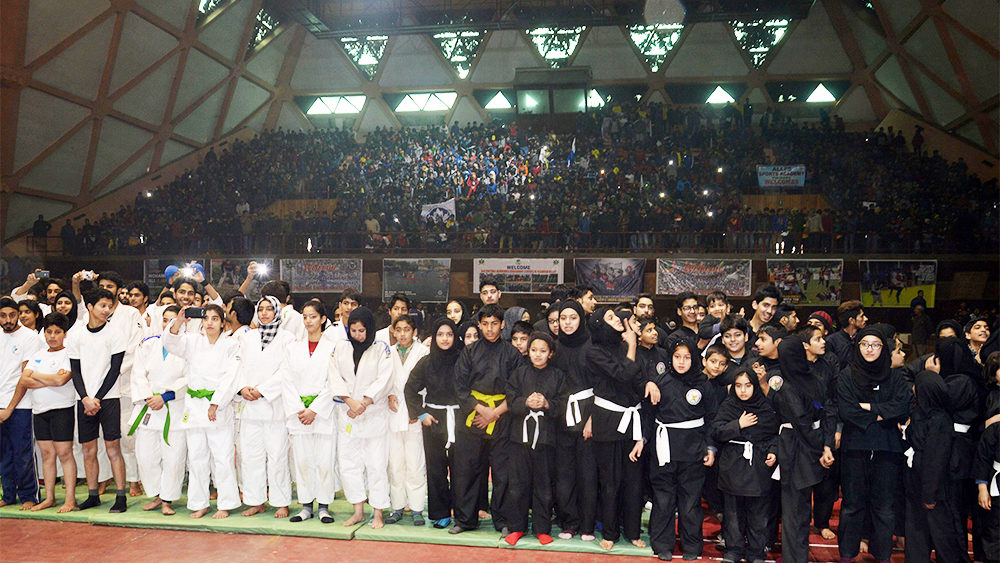 Jammu and Kashmir state sports council Tuesday organised a “grand sports event” at Indoor Stadium Srinagar which witnessed massive participation of people, mostly school students from across Kashmir. Accompanied by parents, they were mostly the students who were engaged with one or the other sports activity.
The event titled Faces of Change was organised to felicitate the young sportspersons from Kashmir who have shown exemplary performances in various sports events held across the world. They had been specially invited to the event.
The event saw a participation of number of students from many schools of the valley, officials associated with the exercise said. “It was a grand show,” one official said. “Indoor stadium never felt so chocked since it was built.”
Secretary state sports council, Waheed-ur-Rehman Para while talking to Kashmir Life said the sole motive of the event was to promote and propagate the culture of sports among the youth and to encourage the budding sportspersons.
“The event saw a participation of all those sportspersons who are directly or indirectly associated with the state sports council,” he said. “This was aimed at acknowledging their contribution and to tell them there is hope.”
“The unrest has inflicted great damage on the psyche of youth. By promoting sports culture among youth, we will be able to channelize the potential of budding sportsperson with proper coaching and orientation,” Para said. “We are planning to come up with an indoor sports stadium in every district of the state within next two years.”
Parra said that CM Ms Mehbooba Mufti despite her other engagements showed her presence at the venue. “Due to her commitment towards youth CM turned up,” he said.
On the occasion, Karate Champion Hashim Manzoor, who won a gold medal in Asian Karate Championship; Kick boxing Champion Tajamul Islam; Kashmir’s international footballers Ishfaq Ahmad and Mehrajuddin Wadoo and international cricketer Pervez Rasool were felicitated on the occasion.
CM Ms Mehbooba presented them with Rs 50,000 cash while state sports council presented them with RS 50,000 each.
Chief Minister of the state, Ms Mehbooba Mufti expressed delight while handing out trophies and mementos to various sportspersons of the state, “Please come forward if you are interested in sports, we will provide full sport to out budding sportsmen of the state,” she said.
A two-minute silence was also observed in respect of Tamil Nadu chief Minister J Jayalalithaa.