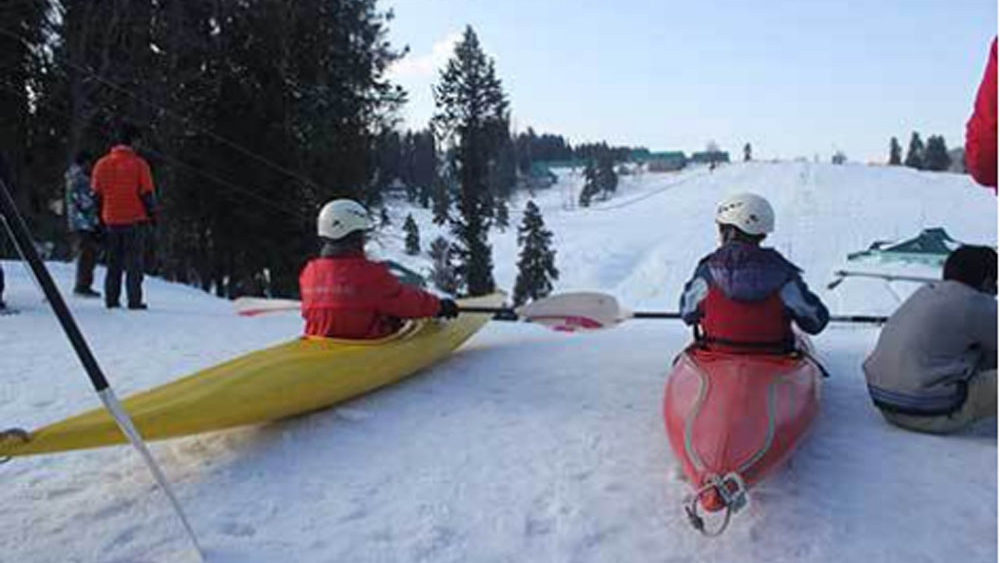 Cruising through the snowy hills

In the absence of more winter sporting events in a ski resort there are less possibilities of promoting winter tourism to its highest. European ski resorts, those have enough facilities and infrastructure with scores of winter sports products, are attracting a huge rush of tourists from all over the world. Winter Sports have in fact become fashion in Alps and Rockies but unfortunately we could not exploit this sector of tourism much in the mighty Himalayas particularly in Kashmir valley due to several reasons. If we are keen to promote this sector we need to focus seriously on the introduction of more winter sports events and raise best infrastructure here. We have been promoting Skiing, Snowboarding and Ice Skating for long time now but these three disciplines alone could not rise the graph of winter tourism here. There are many other snow based activities those lure the enthusiasts abroad but we lag far behind. The tourism players have in fact to act like a grocer who sells many small products and earns little money from each product but at the end of the day he finds enough sales in his strongbox.

In early 1980s the J&K Ski and Mountaineering Association had introduced Ski-Mountaineering in Lidder valley and Snow Paragliding at Gulmarg but unfortunately both these tourism products were not well received and promoted by the tourism players. Soon after introducing Ski-mountaineering here it grew fast in Lidder and Sindh valleys of Kashmir as our lofty mountains and best snow conditions fascinated the Europeans and Australian skiers.  Similarly the JKSMA made its pioneering attempts to promote snow paragliding at Gulmarg but both these sports did not find any serious taker from state Government and thus vanished. Appreciably many national and international ski-mountaineering expeditions were undertaken in Lidder and Sindh Valleys those days. Surprisingly a foreigner was recently seen flying in Gulmarg with his paragliding canopy who used his snowboard to take off from Mt Apharwat and safely landed in Gulmarg bowl at his individual level. The JKSMA had also made similar attempts in early 1980s but due to rise of disturbances in the valley they had to close down their canopies till they became obsolete.

It is highly appreciable that with an aim to add up more snow sports and to promote winter tourism in the state the Winter Games Association of J&K recently introduced yet another fascinating, thrilling and most exciting Snow Kayaking at Gulmarg. Ten boys from different areas of Tangmarg and Srinagar were trained to this unique sport by the experts of WGAJK. Credit goes to Secretary Tourism Mr. Farooq Shah for igniting the lava of snow kayaking that had accumulated in the hearts of senior members of the association. On his directions the J&K State Cable Car Corporation sponsored this grand and historical event, while, Tourism department provided them 3 old kayas for this purpose. The camp, conducted under the supervision of former Kashmir University Aquatics and Adventure Sports Coach, was earlier inaugurated by MLA Gulmarg Mr. Mohammad Abass Wani and Secretary State Sports Council Mr Waheed ur Rehman Parra amongst a large gathering of enthusiasts and tourists. To highlight this new winter tourism product at national level the first ride was taken by Miss Zaira Waseem, the Bollywood child artist, who recently played role in feature film Dangal. The sport is now catching up fast among local youth. Not only boys but the girls too are showing keen interest in this extreme snow sports.

Snow kayaking is a winter sport practised by some kayakers. It usually involves kayakers descending snow slopes, in contrast to river sports such as white water kayaking for which the boats were usually designed. Snow Kayaking is typically done in the backcountry and occasionally at resorts and ski areas. Races are held in a modus similar to those of snowboarding they are known as a boater cross. In the races, kayakers race to a finish line in less possible time. Powder and backcountry snow kayaking have steadily increased in popularity and many videos can be found online, reflecting the increase in the sport’s popularity. Typically either play boats or creek-boats are used depending on the style of snow boating to be done. Although PFDs are not worn, helmets, and paddles are often used. WGAJK has improved its techniques and now they would be introducing snow kayaking as a full-fledged winter sports activity soon.

The process of its development remained slow in the valley due to lack of knowledge and resources. Sources reveal that former Asstt. Director Tourism Mr. Asaf Mahmood had tried to slip down snowy slope in a self-made kayak sometime in late 1970s. The JKSMA gave a breath-taking demonstration of this sport during a Snow Carnival organized by Sonamarg Development Authority some years back. This sport has been officially around since the year 2002 where the first race was held in Lienz, Austria by a local group of kayakers. In the year 2007 a so called ‘world championship’ was held in Lienz and second in Rene Feuerstein (Austria) in 2008. The WGAJK is all set to organize its demonstration in the upcoming State Winter Games. Efforts are afoot to put it as a demonstration event in then forthcoming National Junior Ski Championship at Gulmarg.

Snow kayaking is nothing but cruising through snowy hills in a hard fiberglass kayak. It is also called Snow Boating. It is almost similar to traditional sledding. The kayak works like a sled, but the paddle allows for more control and turns. Instead of sledding down snowy hills the tourists may in near future, slip into a freshly waxed kayak and enjoy an exciting new twist on traditional sledding. Because snow kayaking is considered an extreme sport, few ski resorts allow it; however there are professional competitions that involve bumps, turns, jumps and all sorts of adrenaline-pumping obstacles, which makes watching the sport almost as much fun as doing it. No special equipment is required and paddles are still used to steer, Equipped with a paddle, craft and helmet, snow kayakers take to some of the steep slopes. It is all fun and let us enjoy it. Gulmarg is the best location for this sport that could offer soft and extreme Snow Kayaking runs at Marry Shoulder, Bihari Pole, Khilanmarg and Kongdori slopes. For more thrill one could zoom down other challenging slopes of Mount Apharwat. Snow Kayaking has tremendous scope in other tourist destinations of Kashmir like Sonamarg, Dudhpathri and Aru etc. We need now to focus attention on these new tourism products. Some creek boats (kayaks) are needed to be placed at different destination for use by the tourists. More training programs and competitions need to be organized frequently here. Custom-made downhill snow tracks need to be laid. For those of you who want to have some extreme fun in the snow, this is the right sport for you. Those, on the other hand, who prefer to stay home could just enjoy in seeing all the action here!