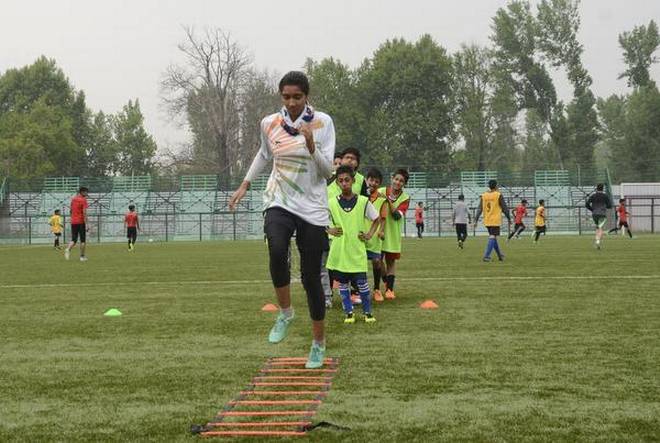 A story of rocks, papers, and soccer

Until the the last week of April this year, Afshan Ashiq, 23, was like any other young woman from Kashmir Valley, nurturing a dream within the circumscribing reality of conflict. Her dream was to play for the Indian national football team.

Originally from Srinagar’s volatile Bemina area, Afshan grew up in a joint family. The daughter of a businessman, she had to fight hard against patriarchy at home and in her neighbourhood to play.

“It’s not easy for a woman to be a sportsperson in Kashmir. My elder brother is still taunted by his friends because I play football,” she says. “Initially, my parents did not support me. But they do now.” Afshan Ashiq, who aspires to play for the Indian national football team, grabbed headlines when she was seen pelting stones at the police to protest atrocities against students in Kashmir.   | Photo Credit: Nissar Ahmed

Today Afshan is the captain of the Valley’s first Jammu & Kashmir women’s State football team. And her neighbours see her as a star. “Every time I am in the news, my neighbours are the first to congratulate me,” says Afshan. But the path to stardom was not easy. She quit her first love, cricket, during school in Bemina because her future in the sport looked bleak. “I was good at it though.”

He passion for sport was reignited at the all-girls Kothi Bagh Higher Secondary School in Srinagar in 2013. Here she found herself particularly drawn to football. “ If boys can play it why not girls?” she asks.

But girls are discouraged from playing football because of the physical contact it requires. It took a lot of convincing on her part, and by 2015, Afshan was coach of an all-women academy. Around this time, Afshan was propelled by another cause. Bemina had turned into a hotbed of street protests against security forces. She was filled with discontent, like many hundreds of youth in the Valley.

And on April 24 this year, Afshan joined students as they clashed with security forces to protest the treatment of students in Pulwama district. Dressed in a blue salwar-kameez, with a stone in one hand and surrounded by women students like her, a protesting Afshan was captured by dozens of cameras.

This image of Afshan and her companions, perhaps the first of women pelting stones, went viral and was published in newspapers worldwide. She became the new face of disenchanted youth in the Valley.

“The policeman made objectionable remarks about the girls. I could not bear it,” says Afshan. But she is quick to add she “does not want to look back to the episode any more… It doesn’t make me happy.”

There has been a fairly happy flipside to the episode, she says. “It highlighted the game of football. People were curious to know more about women playing football in Kashmir.”

There has, since, been no looking back. The academy, where she coached, suddenly saw a 100% increase in girls registering. “After the episode, over 50 girls turned up for coaching. I told them whether curfew or shutdown, we will all hit the ground on time. And everyone did,” says Afshan. “Parents feel comfortable sending their daughters to train under a female coach,” she adds.

Afshan is now the captain of the first ever Jammu & Kashmir women’s State football team.

She wishes other States too come to Kashmir to play. “It will help us identify our weaknesses. Most teams take the J&K team lightly. I want to build a competitive team,” she adds. “My aim for 2018 is to see a number of women football coaches.”

Afshan has a message for Kashmiri youth: “Street agitations takes us backwards. We have to become role models.”