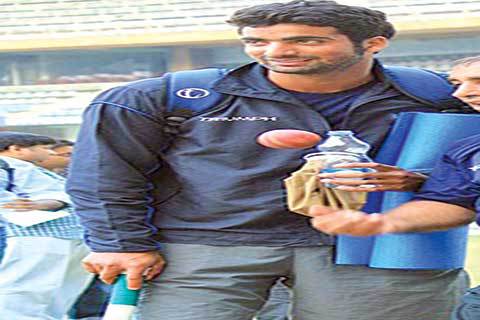 After Parvez Rasool, another young cricketing sensation from Jammu and Kashmir, Umar Nazir, who made his first-class debut in 2013, has made a mark in the domestic cricket by becoming the highest wicket taker in qualifying round of the Syed Mushtaq Ali Trophy this year.

Two other young cricketers from J&K, Shubham Khajuria and Manzoor Dar have also been included in the squad as stand-by players.

Syed Mushtaq Ali Trophy is a T-20 domestic cricket championship, organized by Board of Control for Cricket in India (BCCI), among the teams from Ranji Trophy. It is named after a famous Indian cricketer, Syed Mushtaq Ali. In a spectacular performance J&K won all the three qualifying matches against formidable Punjab, Haryana and Himachal Pradesh. Umar Nazir claimed 9 wickets in these matches.

The 2017 season of the Syed Mushtaq Ali T-20 Trophy is being played in inter-zonal format wherein five zones including Central Zone, East Zone, West Zone, North Zone and South Zone will compete in a round-robin tournament.

The North Zone will take on South Zone in their first match of the Trophy on February 12 at CCI, Mumbai.

Who is Umar Nazir:

At 6 feet 2 inches, Umar Nazir as come up as a gifted cricketer with an impressive track record. He has played 22 First Class, 10 T-20 and 4 List-A matches clinching 64 wickets.

The Minister in his congratulatory message to the team wished them success for qualifying for the knock-out stage.