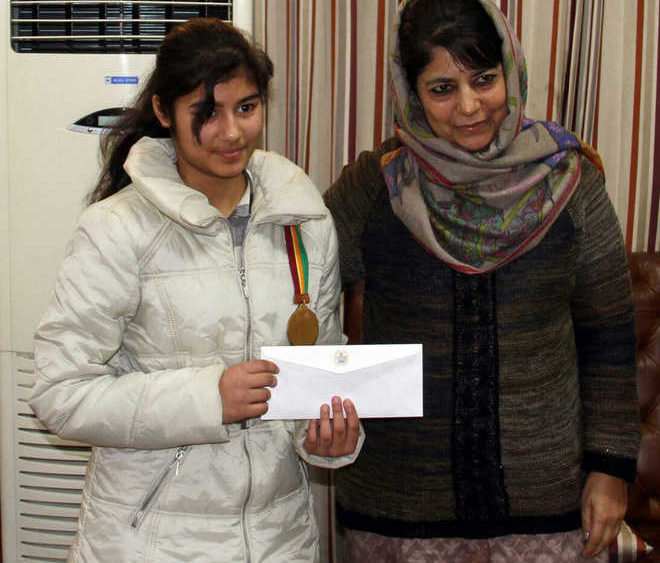 Cyclists, mountaineers are among winners of this year’s state awards

It was a proud moment for sportspersons who were conferred with the state award by the Jammu & Kashmir Government in recognition of their outstanding achievements in their respective disciplines. While sharing their experiences with The Tribune, the award winners expressed hope to bring more such laurels for the state in the future.

For Meenal Gupta, who created history by becoming the first girl from the state by winning an individual gold medal for India in the U-14 girls’ category at the Commonwealth Chess Championship held in Sri Lanka, the award was a tremendous boost for her.

“Without any doubt, it is always a proud feeling when your achievements are recognised by the government. I, too, feel the same,” an elated Meenal told The Tribune.

“Chess is becoming popular in India and many players from J&K are striving hard to prove their worth at the national and international levels. I am now planning to compete in a few upcoming international championships slated to be held in Bangkok (Thailand) and Spain,” the Class IX student of Kendriya Vidyalaya, Sunjuwan, said.

Another state award winner, Surya Bhanu Pratap, a wushu player, said it was a dream come true for him. “Winning a state award is the dream of every sportsperson but this is just the beginning for me. I am putting in all my hard work to achieve success in my career. I would love to become the first sportsperson from J&K to win sports’ biggest award, the Arjuna Award,” Surya Bhanu Pratap said. Other outstanding sportspersons who bagged the state award included Tajamul Islam (kick-boxing), Hashim Manzoor (karate), Abrar Khan (cycling), Ishfaq Hussain Kand (kayaking and canoeing), Tsering Angmo, Tashi Laskit, Rigzin Dolkar and Stanzin Laskit (all mountaineering).

Article Published in The Tribune
Link to Article