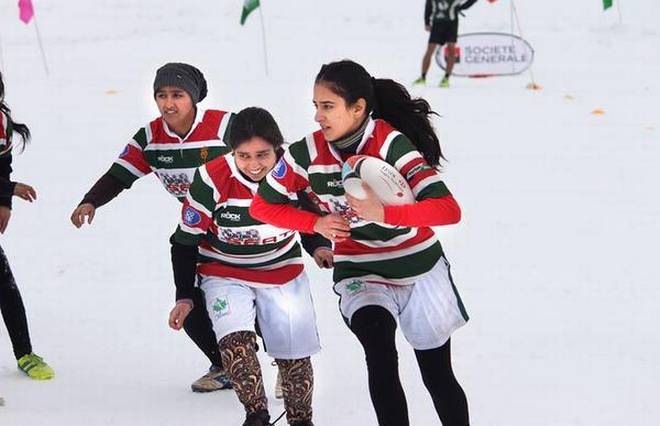 In a break with tradition, girls in Kashmir say ‘salam’ to snow rugby

In the past, winters meant indoor time for girls but women like Irtiqa Ayub, 20, a student of Srinagar’s Government Women’s College on M.A. Road, are changing all that with the sport, chasing rivals across the snow and braving the chill.

“I picked up this game purely for its speed, energy level and blood rush. When the rugby ball is in your hands and you race to score a goal, it’s an extraordinary feeling,” Ms. Ayub, a resident of Srinagar’s Eidgah area says, as she prepares for a national event in Gulmarg on February 18-19. Sixteen teams from across India will participate in the event.

Ms. Ayub had a lot of convincing to do before her father, a government employee, agreed to let her take part. “My father was reluctant initially when I was at school. Once he saw my name and picture in the newspapers, he came around,” said Ms. Ayub, who has taken part in five national events.

“This time, I am practising to lift the trophy,” the young player said, referring to the upcoming winter sports in Gulmarg.

For Zunairah Amber, 12, a class 7 student of Oasis Public School, kabaddi was boring. “I was good at sports. Yet, winter vacations offered little opportunity to take up anything. I quit kabaddi to play snow rugby,” said Ms. Amber, who is backed by her father, a government employee, and a sportsman himself. Traditional sports like kho kho and kabaddi are passé for these new-age Kashmiri girls, who battle it out on snow fields and sands in jerseys and shorts.

Their numbers are growing. Irfan Aziz Botta, chief coach, J&K Rugby, said, “Over 4,000 girls are enrolled for the game with the State sports council. We have four female coaches too.” Rugby was introduced in Kashmir by Mr. Botta in 2004.

Article Published in The Hindu
Link to Article