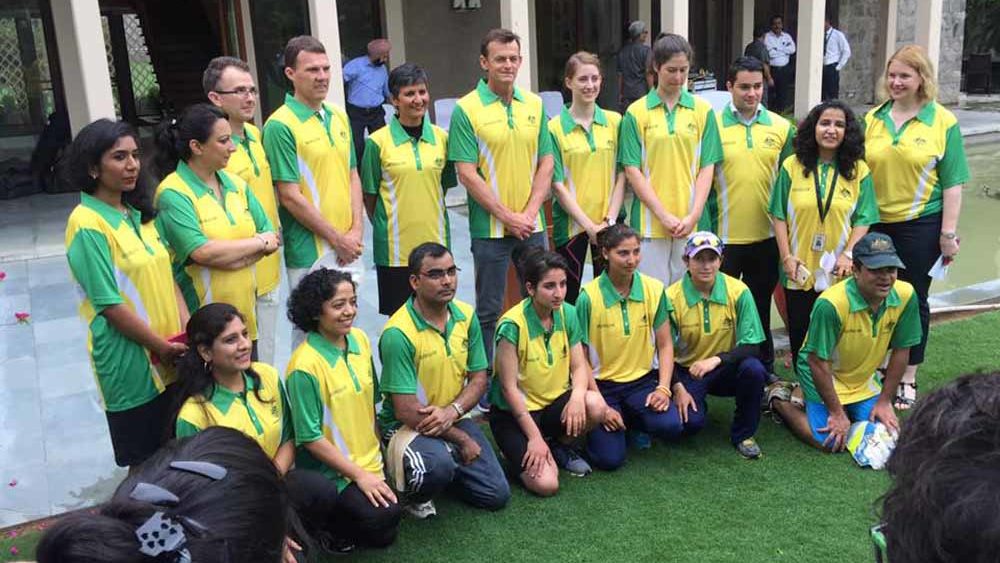 They also played an exhibition match against a team from the Jesus and Mary Convent at the Australian High Commission.

The friendly match was played between Education for All Stars Cricket team captained by Adam Gilchrist and Women Cricket Team from Jesus & Marry College, New Delhi at Australian High Commission.

The Education for All Stars Cricket team comprised a mixture of High Commission staff and women cricketers of Jammu and Kashmir. The arrangements for the match were coordinated by Advisor to Jammu and Kashmir Chief Minister Prof Amitabh Mattoo and the event was a joint venture of State Government of J&K and Australia India Institute Delhi.   Besides Australian High Commissioner and cricketer Adam Gilchrest, Advisor to JK CM, Prof Amitabh Mattoo, Dr Amanda Day Counselor (Education) Australian High Commission, Secretary J&K Sports  Council Waheed-ur-Rehman Parra, Director State Cricket Academy JKSSC Mubashir Hassan and a host of other dignitaries were present on the occasion.

Dr Amanda Day while welcoming the Adam Gilchrist and other dignitaries thanked J&K Chief Minister for her support and encouraging women to take part in sports activities.

Interacting with the budding cricketers of J&K and Delhi, Prof Amitabh Mattoo said that “it is indeed a great honour to have cricketing legend Adam Gilchrist with us today.” He said that the aim of bringing the girls cricket team to Delhi is to explore their hidden talent. He said that Chief Minister  Mehbooba Mufti personally monitored the arrangements for the event.

The Advisor thanked the Australian High Commissioner for providing all the necessary support in organizing such a successful event. He also lauded the efforts of Secretary Sports Council Waheed-ur-Rehman Para for boosting sports activities in the state.

Later, Adam Gilchrist in his address said that such events help in focusing on the education relationship and promotion of women and leadership in sports. He also highlighted that the two countries (India and Australia) share common characteristics such as dedication, motivation, self discipline and added that there is lot of scope in education sector by exchange of ideas with people at all levels from teachers to students.

“It was  a lifetime opportunity for these budding cricketers to meet one of the absolute legends of the game. Not only was Gilchrist a top pedigree wicketkeeper batsman for Australia, he was known for his sportsmanship qualities world over. His talk will lift the players to make it big in years to come,” said Sports Council officials