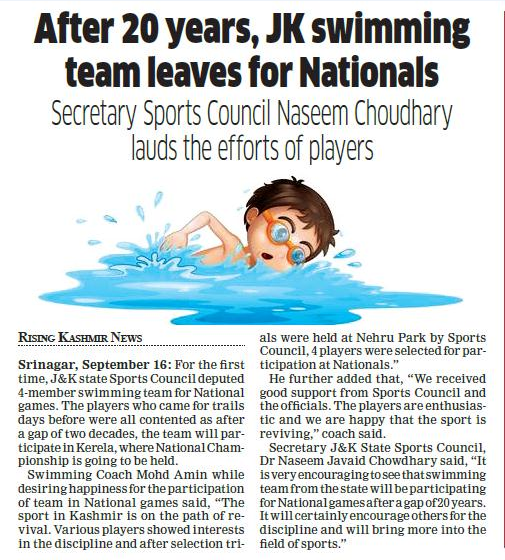 For the first time, J&K state Sports Council deputed 4-member swimming team for National games.
The players who came for trails days before were all contented as after a gap of two decades, the team will participate in Kerela, where National Championship is going to be held.
Swimming Coach Mohd Amin while desiring happiness for the participation of team in National games said, “The sport in Kashmir is on the path of revival. Various players showed interests in the discipline and after selection trials were held at Nehru Park by Sports Council, 4 players were selected for participation at Nationals.”
He further added that, “We received good support from Sports Council and the officials. The players are enthusiastic and we are happy that the sport is reviving,” coach said.
Secretary J&K State Sports Council, Dr Naseem Javaid Chowdhary said, “It is very encouraging to see that swimming team from the state will be participating for National games after a gap of 20 years. It will certainly encourage others for the discipline and will bring more into the field of sports.”